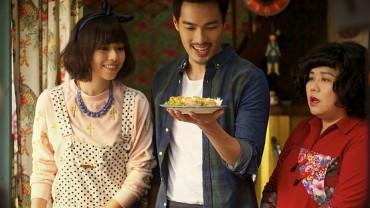 For yesterday’s 2013 Veterans day celebration, some audience members watched two movies at the 14th Annual San Diego Film Festival in 6.5 hours: the four hour Filipino film Norte, The End of History (100+ people attended; although an award winning film at Cannes, only 200 people attended that screening); and the highest grossing Taiwanese film in Taiwan this year, the 2.5 hour Zone Pro Site: The Moveable Feast.

So what’s with the funky title?

When the Chinese title of the film is correctly pronounced in Taiwanese, Zong Puo Zai, it sounds like Zone Pro Site, which is the title given to the age old master chefs who were in charge of ban doh (Taiwanese; translation: setting up table), the traditional art of Taiwanese outdoor banquet catering usually featured at weddings, special festivals and a baby’s one-month-old celebration. A zong puo zai would arrive at a ban doh with just their cooking utensils and would have to create deliriously delicious dishes in makeshift kitchens from ingredients supplied by the client. In the days of yore, a top zong puo zai would earn respect and become legendary chefs during their times.

That being said, in director Chen Yu-hsun’s US$2.36 million budgeted Taiwanese scrumptious culinary and delightful romantic comedy Zone Pro Site, legend has it that more than 20 years ago, there were three master zong puo zai: Master Silly Mortal;  Master Ghost Head; and Master Fly Spirit. On the surface, it sounds like three characters from an old style wu xia martial arts movie as each master has created their own ban doh way, and must find a disciple to keep their art alive.

Due to her ex-boyfriend’s misadventures, sassy failed actress/model Hsiao Wan (Kimi Hsia), daughter of the famous zong puo zai Master Fly Spirit, is on the lam from two bumbling debt collectors. She flees to Tainan, southern Taiwan, to hook up with her wild and wooly mum who is running a failed noodle restaurant.

As she develops a loving relationship with a self proclaimed food doctor Hai (Yo Yang), who saves the noodle shop, things go awry when the debt collectors find Hsiao and she is also unable to get over the fact that Hai has a prison record. The only way out is to win a cooking competition by learning the secrets of her father’s cooking skills, something she has no interest in, and defeat the famous living legend Master Ghost Head and his new protégé Hai.

Taiwanese comedy has come a long way from the over-the-top, Taiwanese opera influence facial, voice and language antics that would escape the interests of anyone outside of the country, to today’s intelligent humorous gags, set pieces and silliness that translates into any culture…and Zone Prone Site takes the cake to new layers.

Much of the film’s verbal humor originates from Taiwanese dialectical colloquialisms. For example, Hai speaks in a crazy mixture of tones and pronunciations from various part of the country, which is a collection of several islands, Taiwan being the largest. Although the language as a whole doesn’t exist, audiences around the Taiwan will be able to recognize at least one of the accents. Also look for a team of three guys that are colloquially called zhai nan, a unique combination of comic book geeks and computer/online game nerds that act immature around beautiful females. Yet they’re also the guys you can depend on for things you never knew existed.

Because as the film says, “All roads lead to Taipei,” where mandarin Chinese is the predominant dialect as well as that is where the cooking contest is being held, specifically, outside and around the grounds of Taipei’s huge Sun Yat Sen’s Memorial Park, which every morning is surrounded by people doing, kung fu, taiji, folk dancing and general calisthenics.

Many Asian rom coms begin strong with new wave cute and humorous interludes, only to later in the film become predictable, old and eventually disappear from the film’s landscape as filmmakers get lazy trying to come up more original material. Zone Prone Site is fresh throughout the entire film with a finale that is unexpected as it is unpredictable.