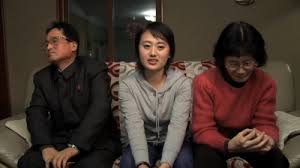 Last night, Singapore filmmakers Lynn Lee and James Leong’s cinematic accomplishment, The Great North Korean Picture Show, had it’s US premiere at SDAFF 2013 and provided a prodigious picture of pseudo-propaganda psychosis that outweighs the unrepentant rubbish recent American glory hunters are pawning to the US public.

The film opens explaining that in 2008, they sought permission to document the lives of propaganda film workers in North Korea (NK). Eight months and countless emails later they’re granted access but only if they agree to a few rules: Minders would accompany them everywhere; and their footage would be reviewed by censors at the end of each day.

The film’s subtitles read: “The conditions presented us with a challenge: would be able to follow the rules and still make a credible film?”

Their first contact, with to many Americans an alien culture, Lee and Leong become our Kirk and Spock, as they begin tricorder readings on a group of 2nd year acting student from Pyongyang’s prestigious film school having a lesson near the Taedong River.

It’s at this point, and in fact for a good part of the documentary, one has an overwhelming sense of cynicism that everything we’re about to see is scripted for the filmmakers’ cameras. The professor spouts on about their great leader comrade Kim Jong Il’s rules on ideology and philosophy…undoubtedly the sort of things that would have been covered during their first year as students…possibly on the first day of their schooling.

We’re introduced to male student Kim Un-bom who shares with Kirk that on their NK planet, they work hard for fame with the goal in mind to make their fearless leader happy, while earthlings from Hollywood and Europe only act for themselves.

Many months later the enterprising film crew is allowed to visit the Korean Film Museum filled with pictures of Kim Jong Il. They meet with the students in front of a huge mural showing the great director Kim shooting a movie about NK fighting the Japanese. I wonder if the director remembered that South Koreans died during that war.

The museum curator lectures on Kim’s ideology and philosophy, and the students “act” like they’ve never heard this amazing information before. We next learn about Kim’s film career and his views on storytelling and the scripting process…I’m thinking he’s probably the only guy in NK that had a bootleg copy of Syd Field’s Screenwriting.

Skepticism of the NK cast wanes a little bit as we’re told that the footage shot on the museum’s 2nd Floor was detained for a long time because the shots of Kim weren’t properly framed. Wow the dude was a diva…just like we have in Hollywood.

Recent case in point. Although Christina Aguilera reportedly slimmed down a lot and openly flaunted her body, as a judge on her show The Voice, she demanded final say on all camera shots and angles that she’s in…and you thought the show was live?

Pyo takes Lee and Leong onto his latest film set where he’s shooting a gut wrenching scene when the Korean army has been ordered to disband by the Japanese. All the extras are soldiers, a handful of young lads from NK’s estimated 1.2 million soldier army.

Pyo’s frustration grows as the soldiers are told to act angry, sad and then cry because of the evil Japanese army’s ultimatum. All they could do is giggle and grin like kids being told not to laugh in class…my God…these men act like high school kids…they’re human.

The crew visits the home of female student Ru Yun-mi who’s father is a scientist for the State…thus the posh and spacious apartment. Her breakfast consists of coffee and seven dishes…perhaps staged to show how they’re treated well by the Government…but after five mouthfuls she says she full. Real reason? She admits that she doesn’t want to get fat…wow…she’s like most American sophomore girls in college.

To me, the film’s most powerful scene has Yun-mi sitting on a sofa between her parents as they discuss when she told them that she wanted to be an actress and they said no way, she tried even harder to do it. While rubbing her hands, Mrs. Ru tells us that only after her friends said her daughter was a good actress, did she (Mrs. Ru) become happy.

Leaning away from and not looking at Yun-mi, Mr. Ru is now okay with her being an actress because she’s studying with famous people. When Yun-mi tries to show affection by resting her head on his shoulder, he moves further away and pats her shoulder like a pet. The look of disgust she gives him and then to camera as if to say, “What the…?” is  priceless. Every picture tells a story don’t it?

“For a moment James, but your moment is fading,” says Gary Mitchell to Kirk in the episode, Where No Man has Gone Before, as Kirk is about to kill Mitchell before his God complex destroys the USS Enterprise.

This film gives us a fleeting moment into the lives of some “average” NKs struggling to survive and make a difference. Perhaps there’s hope for NK and dare we think that everyone there is not paranoid about impending doom at the hands of the Americans. For a moment, just perhaps, we see a face of charm, hope and friendship.

But it fades as with the current leadership in NK plays out his crazy high school-ish pranks, we realize that the split between NK and SK has created a parallel universe…the peninsula needs a major career…I mean Korea…change.