CONFESSION OF MURDER: Talk About a Book Deal 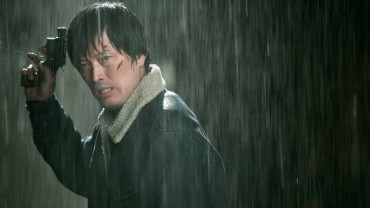 Let me first begin that I really liked this film and to me, it’s one of the best Korean movies I’ve seen this year.

Make no doubt about it, director Jung Byung-gil’s Confession of Murder, requires one to enter the theater with spare fingers and toes as the nail biting continues from start to finish. Be warned that for the last third of the film, be careful not to continue biting your nails, because once they’re gone you may not realize that by the end of the movie you’ll have nine fingers left. Ouch man!

By the time it takes you to take that first nail nibble, you’ll be thrust into a maniacal maze of menacing pugilistic mayhem. It begins with pouring rain, carotid cleansing, bar room brawl, a masked marauder, more quake cam to shake a leg at and dizzying POV shots that are not always as dramatic as they are sometimes more frustrating than a heck-tic trip to Dante’s Inferno.

The scene end with an H.P. Lovecraft sardonica, Cheshire Cat grin that becomes a badge of dishonor and psychotic reminder to super detective Choi Hyeong-goo’s (Jung Jae-young) failure in the line of police and family duty.

A note about the beginning fight.

Jung received a lot of positive hype on his documentary about Korean stuntmen in Action Boys (2008), basically a rehashing of earlier documentaries on Hong Kong stuntmen, where he basically featured the physical prowess of a group of Korean stuntman at the time.

Most of the sight gags were rather old hat and can be seen in many demo reels made during the explosion of LA-based stunt teams that were formed in the early 2000’s due to the rise of interest in Hollywood’s love affair with Hong Kong action.

On the surface, the end product of the fight serves the film’s purpose…Detective Choi is marred and marked for life. However, if the fight was supposed to raise Jung’s status as an action fight genius…it didn’t.

Shooting action at night, with shaky cam, close-ups, MTV editing, where one is unable to see the fight, thus the fight continuity is up the creek, then he’s basically done the sort of fights that we’ve been seeing in Hollywood this past 15 years…fights that have received low praise from American audiences that have become more discerning over the decade.

And speaking of 15 years, back to the film, which comes down to a series of moral over personal Choi-ses that our hero is faced with. After 15 years of Choi trying to find the serial killer responsible for killing 10 women, one of which was his future wife, and giving Choi the scare and scar of his life, the statute of limitations on these murders runs out.

Bing…bang…boom…alleged killer Lee Du-seok (Park Shi-hoo) releases a memoir detailing his horrific crimes against womanity, knowing that by law he is untouchable. However, surviving family members of Lee’s victims are honing in on Lee like a Mercedes hood ornament that looks more like a target site for hitting unwanted pedestrians than a company symbol.

As Lee’s book becomes a million seller, his notoriety grows as does a peculiar fan base that worships him for coming clean and telling the truth. Choi is thrust back into the limelight and he’s the man that carries the torch to find the truth if Lee is really the killer or a crafty copycat in the making.

He’s  torn between taking matters into his own hands and his oath of upholding the law even at the risk of making enemies. It all turns into a satirical, media frenzy, power struggle where the aim of the game is for Choi to avoid getting another Cheshire Cat requiem playing on his face.

Although Jung’s fist-I-cuff eyes for fight choreography and direction is lacking in this film, an outrageous and seemingly ridiculous, third of the way into the movie car chase sequence rescues his reputation as an action filmmaker by bringing back the meat on his action chops.

It’s full of absurdity, compelling camerawork, and a foot chase and fight on, in, by and between moving cars with partial use of a hospital gurney that will not make you lose your patients…I mean patience…with the movie.

Did anyone else notice that during a press conference scene the English subtitles called the book, “Confession of Murder” but the English book title of the book on the screen reads “I Am the Murder”?