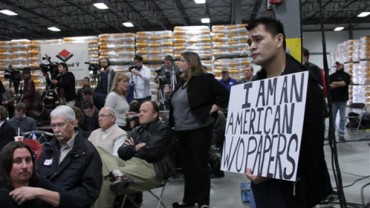 Screening a film about a non-documented alien (Documented) at the San Diego Asian Film Festival’s closing night, which is held in a popular city for UFOs and visitors from the border city of Tijuana, Mexico, there’s a chance some of the crowd may associate with the film’s quasi-hero, Filipino Amer-whatagain?, Jose Antonio Vargas, and may also know what it is to be an undocumented American…or as mainstream America chides…an illegal immigrant.

As I’m watching Vargas’s story unfold, a story about a 16 year-old boy who came to the United States at age 12 from the Philippines with a green card, only to find that while trying to get a driver’s license was told that his green card was fake…I thought about one experience I had as an immigrant from England.

When I was 16 and living in upstate New York back in 1972, I was with some friends, they were drunk, I didn’t drink…but we were all pretty rowdy. A policeman came up to the car and asked me to get out of the car. While giving him my license, in a highly polite and heavy English accent I said, “What seems to be the problem constable?” He replied, “Oh you must be an alien.”

My first impulse was to laugh out loud as all I could think of was about Martians and then telling him that my spaceship (dad’s Monte Carlo) is registered with the Intergalactic Department of UFOs. I of course didn’t and said, “Yes, I’m from England.”

He looked at my NY State Driver’s License and said, “You’re documents seem to be in order, drive your friends home.”

Document’s seem to be in order?

The sad irony is that Vargas has no documents and although he wants to be a legal documented American, there doesn’t exist for him and the eight million undocumented Americans (one million being Asians) a path toward that goal.

Living this lie, how could he now not suddenly feel fear, guilt and feelings of cheating some higher institution…his friends, the government, school, past employers, God, or the highest power that we are all supposed to be a beholden to…ourselves.

Consider that Vargas has been paying taxes since he was 18, has been an outstanding citizen, a pundit on TV political chat shows and was a Pulitzer Prize winning journalist for the Washington Post yet he’s not recognized because there is no pathway to citizenship for him.

Part of his road to redemption was to write a “coming out” piece for the New York Times sharing his story that he was an undocumented American and then challenging the country to ask a simple question, “What does it mean to be an American?”

Is it what’s on a piece of paper? What’s in the heart? What you do for your community?

SDAFF’s fearless leader, Korean American Lee Ann Kim shares with me, “Vargas puts a different face on immigration reform. Most people believe that immigration reform is about Latinos and Mexicans but there are ton of Asians having the same issues. In fact, the API (Asian Pacific Islander) community is the most affected by the immigration laws out there right now. There’s just so many undocumented Asians who live here who don’t have a path to citizenship.

“It ties into my own lifetime struggle to make sure that I belong here. As an immigrant that came to the US, grew up in the Midwest in 1970s. There’s a reason why people asked me if I was Chinese or Japanese, or how did I learn to speak English here, where’d I come from, or saying to me, ‘You’re not from around here.’ All these things because they don’t think I’m an American or I don’t look American. The beauty of our festival is that it’s so American and celebrates the American experience, which is also a global experience.”

Although Documented follows Vargas’s plight to spread the word and socio-politico ramifications of his and many other living conundrums in the U.S. immigration landscape, including Vargas trying to provoke a dialogue with Republican presidential candidate Mitt Romney, the film also highlights another struggle. For 20 years, Vargas refused to speak to or even acknowledge his mum but now he relentlessly strives to reconnect with her and repair that relationship. Yet neither of them are able to leave their respective countries and become whole again in person. The film is unable to provide that needed face-to-face meeting and hug, the moment we were all waiting for…imagine how that must feel for Vargas.

Near the end of the film Vargas is testifying in front of the Senate and asks the question, “What are you going to do with people like me?”

President Obama, what is your answer?

P.S. Immediately after the first Friday, November 15, 2013 screening of Documented  there was an encore screening where 20% of the ticket sales were donated toward relief efforts to help survivors of the typhoon that devastated parts of the Philippines this week.