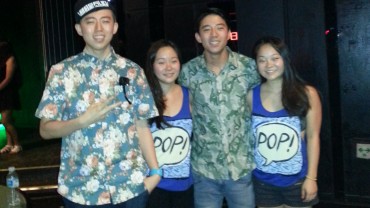 One can’t ignore the obvious, you’re Asian yet your parents are white or black. At what point in life do you realize that you’re different, that these are not your birth parents? How do you ask questions that you may or may not want to know the answers to? At some point, you check the dictionary and look up the word “adoption.”

As the years pass, there’s a voice in the back of your head that slowly moves forward and one day, when you’re strong enough, daring enough or are so overwhelmed by the need to know…a path awaits in front of you. It’s a tough path rife with fear, anxiety, doubt and many other emotions that often times may be suppressed, and when they surface…Pandora’s playground awaits you…and it ain’t about swings, slides and merry go rounds.

Although in an esoteric sense it might; mood swings that come from emotional stress, the ups and downs of what we do in life as it spins out of control.

So maybe you’re at an age where you’ve worked through undoubtedly internal struggles for years. You love the parents who are your parents, who’ve raised you not just like you’re their own child but because you are their son or daughter.

Yet in today’s society, where we now don’t just blindly accept situations that seem askew, but we’re taught to question, to search, to pursue and to find the truth…because at the end of the day, what we do with these truths…that is what determines who we are and defines our identity.

Sunday, November 10, 2013, at the 14th Annual San Diego Asian Film Festival, there was a panel discussion, Separated at Birth, featuring two Korean Americans, Samantha Futerman and SDAFF Alumnus Daniel Matthews, who were both separated at birth and at some point(s) in their lives have faced all of the above scenarios and more.

This year, both of their lives in a split second changed significantly and with the power of media and social media, not only did they find their birth parents but they also learned that each had a twin, a twin raised on the opposite side of the world.

With SDAFF’s and Pac-Arts fearless leader Lee Ann Kim as the moderator, Sam and Dan shared their Pandora playgrounds with an eager packed audience. We learned enough to be engulfed by their stories but not enough to be completely satisfied…thus leaving us all with great anticipation and excitement to hear more about each tale as they themselves navigate through their personal lore.

It was never Dan’s intention to search for his biological parents but when destiny presented itself with such unabashed obviousness he followed the Korean brick road and found more than Oz.

For Sam, the Korean brick road found her as through youtube and skype, twin sister adventure Anais Bordier in London reached out to her.

Both of their stories are being documented in differing ways, Sam as a documentary film and Dan as a web TV series to be split down into 4-30 minute episodes.

For all parties concerned, their lives have now all changed forever. What awaits them is a mystery and an adventure of a life time…things to them that may present them with the answer to the age old question…What is the meaning of life?.