12-year-old Lianna Treitler is blogging about our festival! Here’s her first entry: 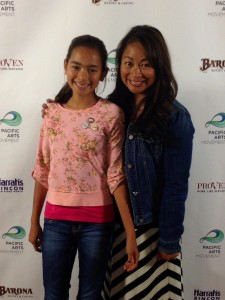 To kick off my FIRST EVER blog and my first ever San Diego Asian Film Festival experience, I saw a collection of 9 short films called Shorts for Shorties. Each of these short films, either animated or not, had a special lesson. Every short had a clever story that represented virtues like friendship, loyalty, empathy, compassion, and imagination.

One of my favorites of the collection was My name is Asiroh. In this short film a “young girl learns the history and story behind her unique name through a telling of her heritage.” I loved the way the film maker unfolded this story of Chinese culture in a way that kids, like myself, could understand. I found this short to be very heart-warming and relatable, as I have a “story” behind my name too.

Another one of my favorites was Hu’s Game. This film combined adorable animation and a storyline that sent a relevant message to the viewers. In this short the main character, Hu, felt sad because he was being excluded from a group of kids; he wanted to play their game with them. But he soon created a game of his own (drawing), and in the end all of the kids got along and became friends. From this film I learned that sometimes you might feel left out or different from everybody else, but you should never let someone make you feel bad about yourself. This theme is such a simple message, but told in such an imaginative way. Other films like Playing the Piano, and Doroncoron, had great animation and creativity, as well.

Overall, my first experience with the San Diego Asian Film Festival has been super fun. The vibe in the theater was energetic, and I could feel the Asian pride all around me. I’m really looking forward to my next movie!