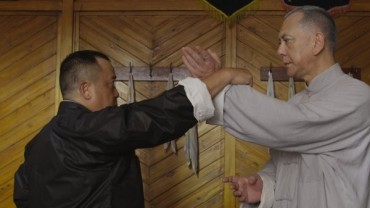 “What the point of kung fu if you can’t help a friend?”

The sad words and helpless look of Ip Man given to a close family friend that helped take care of the venerable wing chun kung fu teacher Ip Man during World War II, when the friend admitted to Ip that in order to feed his seven children he had sell his newborn baby daughter.

Besides dedication to martial arts, the real martial artists are the one that practice kung fu for the benefit of oneself and the others around them…whether it be fellow students, one’s own students, family or friends…and not just about fighting.

These are messages inherent in last night’s packed house screening of Ip Man: The Final Fight at the 14th Annual San Diego Film Festival’s (2013). Messages that many martial artists are maybe forgetting when it comes to practicing martial arts.

Thus ironically, the film’s strict nature and theme, pending on the audience, can be the movie’s weakness or strength, because Anthony Wong’s poignant and almost saintly portrayal of Ip would be harmed if it was filled with high octane, Donnie Yen’s Ip Man action (Ip Man and Ip Man 2).

It’s impressive that the filmmakers of Final Fight stuck to their guns of staying true to Ip’s life in post WW2 Hong Kong, a traditional martial artist, with a strict code of moral conduct and philosophy, and fighting only as a last resort.

Since an Asian film festival is about Asian films (sounds a wee bit redundant, ay?), no Asian film festival would be complete without screening the genre that has defined Chinese cinema since 1905, when the first martial arts film ever made, Ding Jun Mountain, starred Beijing opera star Tan Xin-pei. By the 1920s, Chinese martial arts films were called wu xia pian (chivalrous hero film), where characters fought with fantastical powers.

Sad note, after the communists seized power in China in 1949, Mao Tse-tung’s last wife Jiang Qing, because she was eventually snubbed by the Shanghai film industry due to having illicit lovers (she denied this things), she took it upon herself to destroy that industry. Only 20 pre-1949 films survived her wrath.

In 2008, there was a rebirth of interest in Chinese kung fu films in the West spurned on by Donnie Yen and his portrayal of the titular character Ip Man. The film was a somewhat mythical and highly physically engaging rendition of the early years of Ip Man in Foshan, Southern China prior to and during Japanese occupation of China.

Since then, the Ip Man franchise has wing chuned out four other tales:  the Donnie Yen starring Ip Man 2, The Legend is Born: Ip Man (2010; originally Ip Man 3, until Yen became fed up with overkill of the character, thus the title change); the enigmatic and wondrous Tony Leung starring The Grandmaster (2013); and the last of the franchise The Final Fight (2013).

Another of Ip Man’s martial arts convictions was that although he relished teaching students willing to take the arts seriously beyond it’s physical components, kung fu was not about having schools. It was this philosophical tenet that was one of the many things intricately woven into Wong Kar-wai’s dynamic epicpiece The Grandmaster. The particular point about kung fu schools was presented to Ip by the esteemed Gong Yu-tian, creator to the secret 64 Hands and leader of the Chinese Martial Arts Association.

Where Wong purposely wanted many of the martial arts old school ways to remain hidden to the audience, his way of respecting and giving nods to all the real kung fu people he admired, including Ip Man, Final Battle director Herman Yau wanted to make sure Ip’s philosophy and way of wing chun life was totally understandable to all.

As the film goes, Ip Man, a man suffering from chronic gastic problems, travels alone to Hong Kong in 1949, and ends up teaching wing chun on a rooftop building. He repeatedly shows his kung fu ilk as his flock of students broadens and they too develop reputations as solid and tough martial artists.

Years later, Ip’s wife comes to Hong Kong but is quickly disenfranchised with life there,  and returns alone to China. Shortly thereafter, Communist China closed its borders to Hong Kong, Ip never saw his wife again…years later she passes away.

The film ultimately shows how Ip weaves through life sticking to his philosophy as a man and as a martial artist, occasionally letting loose with some pretty dynamic pugilistic content when it serves a righteous purpose.

Ip Man passed away December 2, 1972 from throat cancer, undoubtedly caused by a combination of being a chain smoker and vomiting gastric acid.