IP MAN Before SDAFF 2013: The Grandmaster 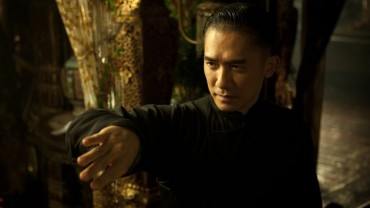 In celebration of SDAFF 2014, my wife Silvia and I are sponsoring under our business name, Vivalachi Alternative Health and Wellness Services, the kung fu film Ip Man: The Final Battle.

In leading up to this final film of the Ip Man franchise, I’d like to share with you all a review I wrote for www.the-filmfiles.com on what I feel thus far is the most dynamic of all the Ip Man films out there, The Grandmaster. I have received a lot interesting comments from the readers…applause from the ones who know me and my storied background in film and writing…and moans from the ones who still don’t get the movie. Comments and discussion are welcome.

Since Hong Kong director Wong Kar-wai’s dynamic epicpiece The Grandmaster was released in January 2013, reviews on both sides of the Pacific and Atlantic rims have been a plenty and it’s quite obvious, especially from Western critics, that they just didn’t get it and certainly missed out on the many purposely hidden martial arts cultural nuances.

Most Western critics truly have no clue or can even begin to comprehend what the real martial world encompasses. Instead, they hide their lack of knowledge and inability to research the topic behind bright Wizard of Oz-like curtains of embellished and flashy language detailing the movie’s plot, sensibilities, theme, character development (or lack thereof), cinematography, music and costumes. A handful seem a bit more schooled on Yuen Woo-ping’s martial arts direction and fight choreography than others.

Yes, yes, I hear you…that’s what reviews usually cover…and just how convenient is that?  Thus the difficulty of many writers to think outside the cinematic envelope with their reviews.

The truth is that if you don’t know what the real martial arts world is about and if you’ve never practiced martial arts you just wont appreciate many of the vague subtleties the film has to offer.

To understand what it means to be a martial artist is not about fighting, winning tournaments, being an MMA champion or boasting that you are the greatest…its partial secrets, based on one’s understanding, are intelligently summarized in Wong’s film mantra…seeing, knowing and doing. And this is why lead actor Tony Leung diligently practiced pain-ridden martial arts for three years in preparation for the role, the first year of training under the shadow of not knowing who he was going to be portraying in the film.

After suffering two serious broken bones, a comeuppance if you will into the real world of martial arts training, his main concern was not doing the fight scenes or the skills required on camera to lend authenticity to the film but his worries about hurting someone during the action sequences.

The Grandmaster loosely chronicles the story of real life martial artist Ip Man from the 1930s China, to his flight to Hong Kong after World War II and the Communist takeover of China, and other events leading up to his death in 1972, including a wee nod to Ip’s most famous student, Bruce Lee. 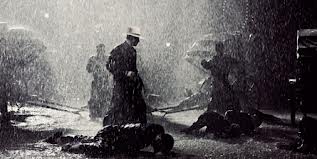 In Chinese martial arts, the term “master” is only given to the founder of a martial art or the individuals who have been chosen down the line by the previous masters. Unfortunately, in the West, anyone who practices martial arts and claims to be good or a teacher, is automatically called a master. So at the end of the day, there can only be one surviving wing chun “master” at a time (unless two were chosen to take over by the previous master). Wow, there’s something I’m sure most Western critics may not have known.

The movie begins with Ip Man reflecting on martial arts, and then cuts to a scene of a fight under the rain between Ip and a dozen combatants. From the get go Leung’s training was put to the superlative test as Leung admits that of all the fight scenes, the one in the rain was the toughest – from every angle.

It was shot for 30 successive nights. All night every night. From about 7 pm, Leung and the stuntmen were soaked but couldn’t change clothes till they wrapped the following morning.

“By midnight,” Leung reflects, “I’d be shivering with cold. It was like that every night. I began to take cold medicines. I felt myself getting sicker and sicker. When we finished up on the scene, I was laid up for five days. I was taking medicines and living on rice porridge. I thought I had pneumonia. I was coughing and coughing, I couldn’t stop. It turned out to be bronchitis. That was the hardest thing about the filming. 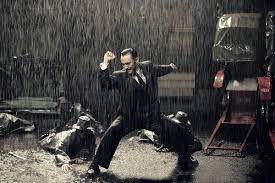 “Also, we were fighting in water that was up above our ankles and wearing cloth-soled shoes. But they were so slippery. So there we were, fighting in the rain, with slippery shoes… the training doesn’t prepare you for conditions like that! It got so cold.

“October, November. On the first night, despite all the fighting, I didn’t feel at all hot, even though I was perspiring. I knew that it’d be awfully cold from then on. The fight scenes really did put me under a lot of pressure. After all, I’m not a kung fu actor. But the film takes kung fu very seriously. I was so nervous. On the one hand, I worried about hurting people, on the other about not fighting well enough. The dramatic parts were easier. There’s pressure in those scenes as well, but not as much.”

Back to the story. Foshan, 1936, the martial arts community is growing restless over the imminent retirement of the Gong Yu-tian, master of the secret 64 Hands and leader of the Chinese Martial Arts Association. In the hope of finding a worthy successor, the northern master sets up a battle of wits with the best fighter from the south…Ip Man. Most audience members probably wont get the spirit behind this fight..to share it would cheapen the esoteric nature of what director Wong wishes to keep reserved for insiders. All I can say is that is such an ingenious angle to do a kung fu battle from.

After Ip wins, Gong er (Zhang Zi-yi; a fictitious character), incensed by the blemish on her father’s invincible reputation, however, demands a rematch to show the superiority of her father’s kung fu style. During the fight she becomes enamored with the married Ip..the beginning of a silent and illicit love that will haunt her the rest of her life.

Due to the second Sino-Japanese war, which eventually merged in the second world war, their paths went in opposite directions only to cross in 1952 Hong Kong. Yet she sacrifices her love for Ip to avenge her father’s death at the hands of a former protégé, Ma San (Zhang Jin)…again a fight that ends in a way that will leave non-martial arts practitioners and Western critics wondering what the heck happened…key moment…the coveted fa-jing followed by the chi and kung fu broken by such a clandestine skill.

Adding to the Western critics’ flummery, which is no fault of theirs, is the English translations often times lost the spirit of the Chinese dialogue that eloquently masks the cryptic codes of martial techniques and philosophy, only to be understood by those that walk the path of martial wisdom.

The fact that there are four versions of the film floating around may also lend to many folks missing out on some very special epiphanous moments, especially American “don’t know it all” film critics. The released 130 minute Chinese cut (one in Cantonese, one in Mandarin both with Chinese subtitles) was created from an original four hour edited version, the third 123 minute version, which debuted at the 2013 Berlin International Film Festival and the Weinstein Company’s 108 minute cut, which obviously lacks 22 minutes of important historical and plot line significance, where a number of shots are edited in a different order from the 130-minute version.

But for those that dig deep, open your mind and experience the real martial world, you might just eventually understand what it means when someone can truly say, “To me, martial arts is a way of life.”