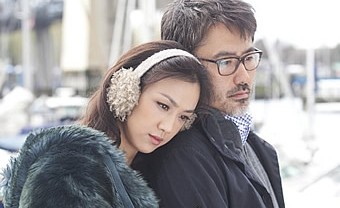 As is typical, opening night at the 14th Annual San Diego Film Festival dishes out a slight of hand film that is ply with layers, some obvious, some subliminal.

Inspired by Nora Ephron’s Sleeping in Seattle… Finding Mr. Right (translated Chinese title Beijing Meets Seattle) is rife with surmise and surprise. On the surface, it’s a film about Jiajia (Tang Wei), a Chinese tourist in America. Below the surface, she’s a spoiled, kept woman carrying her married lover’s baby, who wants the kid born in America.

Armed with her sugar daddy’s bottomless credit cards, things go awry when she ends up at a maternity halfway house ran by a Taiwanese amah. After bouts of bullying the other Chinese expecting mums, her elitist diva attitudes creating social suicidal rifts and believing money can buy anything, her comeuppance is dire when her rich Beijing money man cuts off her funds as he’s now under investigation for dubious business practices.

Similar to the expected growth that puts Jiajia on the path toward becoming a better person, Tang Wei has also come a long way since she was vilified and black listed by the Communist party, as well as banned from shooting in China for a film she did in 2007.

That film was director Ang Lee’s two films in one Lust, Caution: a 2-hour Chinese version; and a 159-minute version with X-rated imagery created to produce controversy, which enhanced Lee’s desire for another Oscar.

Lee’s prior film Brokeback Mountain about gay cowboys traipsed on hallow ground, challenging the macho demeanor of an American, iconic pipe dream about the cowboy, the stalwart symbol of how the West was tamed and won.  The film opened our eyes about homophobia in American in walks of life where most did not want to see.

Set in 1942, Shanghai, one of China’s most bleakest moments in history, the Japanese occupation of China, Wong Chia-chi (Tang Wei) is a shy actress who’s part of a radical plot to assassinate the traitorous Japanese collaborator Mr. Yee. Her job is to use her acting to befriend Yee’s wife, draw Yee into an illicit affair then he will be killed. Ironically, Yee is not a villain worthy of assassination…you actually want him to survive.

Besides the disturbing nature that the explicit sex was totally unnecessary, Lust ignored the horrific history, making the Japanese occupiers observers rather than enemies, where life under Japanese rule wasn’t all that bad. Lee chose doing this because at the time he didn’t want to offend the Japanese since China and Japan were ironing out economical fiscal policy, and didn’t want to open war wounds. It’s as if nothing happened in China, which nicely fitted Japan’s policy that they did nothing wrong in China.

A better title for director Xue Xiaolu’s (directed Jet Li tearjerker Ocean Heaven, from last year’s SDAFF) opus might be Finding Jiajia. Xue insinuates that today’s Beijing is becoming like LA-LA land, tinseltown, a city of mega materialistic minions where everything is about me, me, me and money is the new emperor. Ironic when you consider that Communist China is supposed to be a non-capitalist society.

Another subliminal surprise (spoiler alert) is when we realize that one of the pregnant ladies from the maternity house is lesbian as during birth we see her partner standing by her side.

Several times in the film, whenever the rich boyfriend doesn’t follow through on a promise, the kinds of things that makes Jiajia connect with the divorced Frank (Wu Xiu-bo) raising his daughter, moneybags sends her expensive designer bags.

A snicker comes later when after Jiajia is financially cut off, she takes to selling the bags on the streets as she sprawls her wears on a table and yells in a bad accented English, “Sale, sale.” Like maybe cheap Versace knockoffs from China?

For a film shot in Seattle, didn’t see one Starbucks…hmm, was it really Seattle?

Although Frank is everything opposite to what she thinks is the perfect man, it’s predictable that somehow, through fate hell and destiny high waters Jiajia is going to hook up with him…if his last name happens to be Binks…that makes for an interesting sequel for Jiajia.

Seeing that Finding Mr. Right is one of China’s biggest hits of 2013 as well as being China’s 11th highest-grossing domestic films ever, which is odd considering that China could be interpreted as a heartless nation full of materialistic, money loving folks, at the end of the day, in regard to Tang Wei’s status in China, all seems to be forgiven.