SDAFF 2016: The Travesty of “The Mermaid,” Biggest Film You’ve Never Heard Of.

It’s a hot November 5, Saturday afternoon in San Diego and I’m waiting in line to watch this most far out film. I strike up a conversation about Stephen Chow’s The Mermaid with a group of all-festival pass folks, who are usually across the board more into Asian films as a whole compared to filmgoers that tend to focus on a few genres or films from a specific country. To my surprise, not one of them had heard of the fant-asia comedy Mermaid and there’s nothing wrong with that. Yet here’s the travesty. When I told everyone of what I’m about to write down now, they’re eyes bulged in utter dismay and couldn’t believe it…of course I have no reason to lie.

BTW, just so it’s clear, all figures below are in American dollars.

With a budget of $60.2 million, Mermaid‘s February 8, 2016 opening day box office total in China was $100.5 million. There’s only one other film that has had a higher opening day total and that was in the United States with Star Wars: The Force Awakens coming in at $119.1 million. By February 26, Mermaid had already raked in $459 million.

What’s even crazier is that SONY Pictures miserly released the film in a few dozen theaters in the U.S. without any fanfare, advertising or promotion. In this way the film is now eligible to be nominated for best Foreign Picture at this year’s Academy Awards. If Mermaid should win, it will get immense notoriety and publicity, and for just pennies on the dollar, SONY will make a killing on a nationwide theatrical release and on DVD, VOD and other acronym sales.

Inspired by Hans Christian Andersen’s fairy tale The Little Mermaid, where a mermaid loves a human, Chow’s Mermaid is a modern interpretation with a message more unapologetically blatant than the nasty mudslinging, rude and disrespectful comments that each of this year’s U.S. Presidential candidates are making. Yet in the case of Mermaid, the message is more necessary than for folks to vote this year.

Speaking of politics. In Brexit bludgeoned Britain, November 5 is also Guy Fawkes night. It’s a holiday celebrated by setting off fireworks and burning an effigy of Guy Fawkes, a man who in 1605 London, failed in his attempt to blow up the House of Lords. For movie buffs, the film V for Vendetta (2006) is a stylized presentation  inspired by Fawkes’ debacle.

Filthy rich, ladies man Liu Xuan purchases the Green Gulf for a sea reclamation project and uses a dastardly sonar device that his scientists say is safe for the sea life and merely chases them away like a high pitched whistle can cause a dog to quickly va-moose. Unbeknownst to Liu, similar to an elk being hunted by a pack of wolves, Green Gulf is the home of merpeople and the machine is melting them away. Octopus man assigns the innocent and pure hearted mermaid Shan (played by Lin Yun who beat out 120,000 actors for the role), to assassinate Liu in hopes of saving Green Gulf and protecting the mermfolks.

Armed with sea urchins, bad timing and clumsiness as well as sushi absurdness, farcical fishy set pieces and no holds barred ridiculous humor, she fails and instead they fall in love, which sets off a sequence of events that could lead to mermaid Armageddon and doomsday for Liu and Shan’s unrequited and unconditional love for each other. 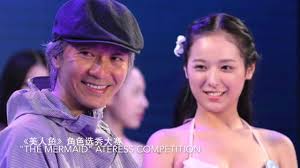 Over the years, I’ve interviewed Chow three times (in Chinese no less) and each time the conversation turns to our common love of Bruce Lee and martial arts…I know his story and he knows mine. Throughout his career, most films that Chow directs, produces and acts in have subtle and/or obvious nods to Lee, and Mermaids is no different.

One of Lee’s most famous pieces of philosophy is to flow like water, an epiphany he had as the non-swimmer Lee was drifting aimlessly around in a small rowboat on a lake in Hong Kong in the 1960s. Since Mermaid deals with water, it was obvious to me that Chow would work in the Lee water moment into the film…and he did.

Additionally, the music during the film’s opening credits was the opening music used by Lee for his highly, Chinese nationalistic, anti-Japanese film Fist of Fury (1973; aka The Chinese Connection).

A tear came to my eye and you’ll understand why if you read my previous blog on Call of Heroes.