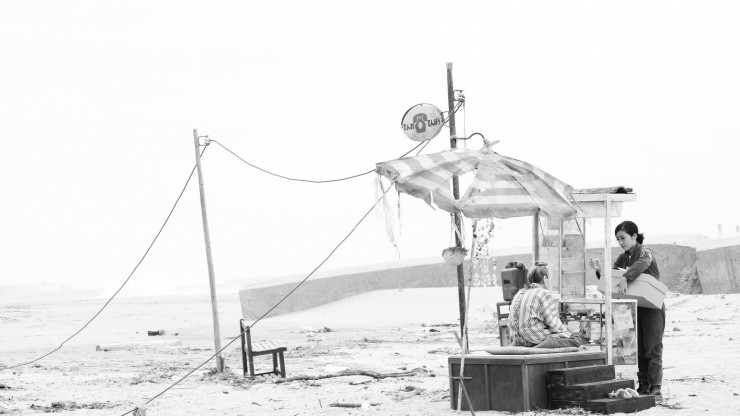 In celebration of Star Wars opening in six weeks, today’s blog is short for R2-D2 (Reid Two-Day Two) at the 16th Annual San Diego Asian Film Festival, where the date also happens to be November 6. Thus, 6 weeks to Star Wars, 16th SDAFF and Friday, November 6. This is kind of creepy if you’re into numerology and so that’s why all hell is breaking loose at last night’s opening night of the UCSD Taiwanese Cinema program (sister program to SDAFF and thus runs at the same time) featuring The Wonderful Wedding and the what the heck was that sci-fi mind-bender Whispering Star going down at the UltraStar.

In a short time ahead in a galaxy far, far away…

… with the people who still live in the temporary housing units due to the nuclear disaster in Namie, Tomioka and Minami Soma, Fukushima…mankind went on to make devastating mistakes. With fewer humans, space became peaceful. Machines dominate and 80% of the population are robots with AI. Humans are now endangered species in the universe. While science has progressed, humans barely live to 100. Human existence is just the flicker of a candle flame. 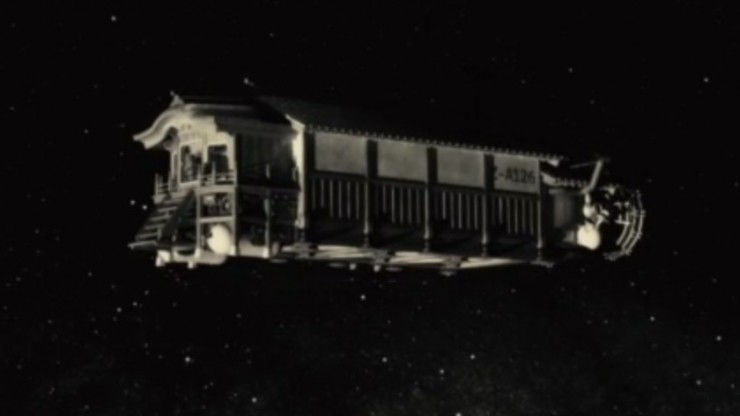 There’s no big spacecraft that protrudes onto screen but a makeshift temporary housing unit, complete with a staircase up to the main entrance, flying through space with one computing device that look like a tube-obsessed radio from the time of the Japanese bombing of Pearl Harbor, which began the path of Japan’s first nuclear disaster, and one person, Yoko Suzuki (lonely played by Megumi Kagurazaka) who keeps the house clean and has one important job to do.

Shot in B&W, Whispering Star is about Yoko, a delivery-robot that runs on eight AA batteries and goes all UPS (Unidentified Person in Space) as she browns from planet to planet not on a Suzuki but in a spaceship and drops off packages to human clients. Roosting behind her intergalactic console 6-7 MAH Em, a possibly surreptitious and faulty HAL-like computing device that controls the spaceship, delivery fem-bot Yoko becomes a delivery pigeon waiting to send messages via tweets as she fantasizes about the world of humans, so close in parallel dementia, yet so far apart in space and far away in each others memories. We can only imagine that Yoko thinks Oh no, as the beetles and moths in the ceiling lights are on the verge of dying, not unlike the human race. 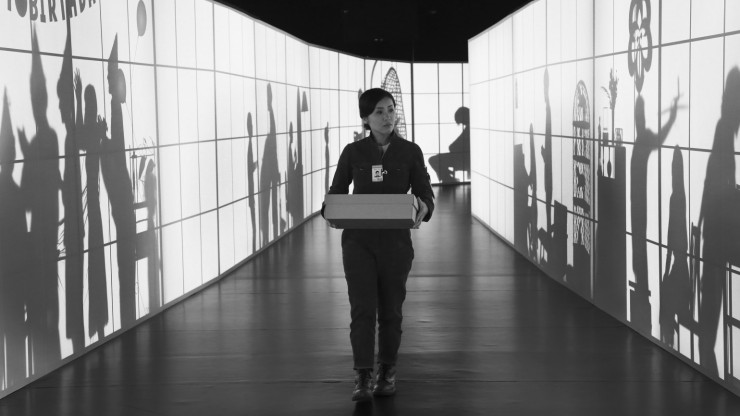 This is the second film at SDAFF that is directed by Sion Sono, the other being Peace and Love. Both are dated as 2015, as Sono, with the release of an additional four feature films shot in 2015, is probably competing with himself for attention as he also attempts to break the how many feature films can I shoot in one year record that would rival his fellow Japanese filmmaker Takashi Miike. I recall many years ago we also had two Miike films at SDAFF…talk about history repeating itself…awesome.

When Yoko lands on a planet to hand-deliver her parcels to the various humans that live on other worldly dilapidated planets, we see the real barren lands laid waist by the stifling after effects of the earthquake, tsunami and nuclear reactor-spill that hit the Tohoku region of Japan four years ago. Similar to many sci-fi movies, Whispering Star reminds us that we live in destructive times, man made or natural. The underlying message is that there appears to be little hope for us to live a full happy live. Instead, similar for Yoko an advanced form of AI, life has become mundane, it lacks meaning, we constantly live in the past and the future is bleak.

Sad huh? It is what it is…just one film’s prediction…probably stemming from the original Planet of the Apes where we saw remnants of humanities stupidity and lust for power. Thus…be careful who you vote for next year.