With the 2015 San Diego Asian Film Festival but a meager five weeks away, it is time to put down the gauntlet. That’s right folks, this is an official challenge to all those involved with the Pacific Arts Movement and SDAFF to come forward and share with the San Diego cinematic community three things about Asian film that at the end of the day symbolizes what Pac-Arts and SDAFF are all about. Three simple questions that after all, partially reflect why we do what we do.

1) The when, where and what was the first Asian or Asian themed film you ever saw?

2) What was the most memorable aspect of the film?

3) How did it affect or influence you? 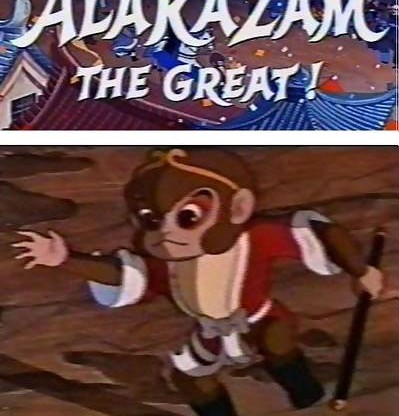 Being a film critic, a man alive because of Chinese film and a martial artist that began his film career in 1979 as an actor/stuntman/fight choreographer in Chinese kung films in Taiwan (token white dude who got his butt kicked in by Chinese kung fu film stars every few months)…allow me to go first.

When I was a five-year-old in 1962, my dad took me to see my first film in a movie theater in the small village of Tadley, England…the anime classic Alakazam the Great (1960).

Here are my childhood memories of the film. Alakazam was a wee monkey who fought with a pole and zipped around the sky on a cloud. He had three friends: a pig; a cannibal who wielded a pole with a half-moon blade that he used to burrow underground; and a Prince. I vividly recall an impish, child-like villain dressed in shorts with a horn on top of his head, which he used like a telephone to call a raging bull who had a human, witch wife who could freeze anything or anyone with a waft of her giant magic feather. Alakazam eventually got home to save his sick monkey girlfriend and they lived happily ever after.

In 1980, when I was living in Taiwan, I read my first Chinese kung fu novel, Xi You Ji (Journey to the West), which starred the Monkey King (aka Swuin Wu-kung). Completed during the Ming Dynasty (1368-1644) and written by Wu Cheng-an, Swuin rides around on a cloud and fights with a pole made from a strand of his hair. Accompanied by his kung fu brothers Zhu Ba-jie (a rake-wielding pig) and Xia Wu-jing (a creature with a monk’s spade), Swuin protects Buddhist Monk Tang San-tsang on a mission to collect sacred scriptures. Then…aha! I know this story, it’s Alakazam the Great. Now that’s deep.

There’s five super neat things about Journey to the West: it’s the first film I ever saw; it’s basically a Chinese kung fu film; I saw it when I was five; when I was 16, my doctor said I’d be dead in five years due to the incurable, progressive deadly disease cystic fibrosis CF); and I was born in the Year of the Monkey. What are the odds that a Japanese anime based on a classic Chinese novel is playing in a no name theater in the middle of nowhere England during a time of anti-Japanese sentiment?

So is it a coincidence that SDAFF begins in five weeks? 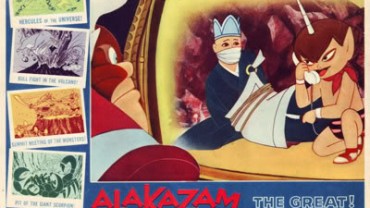 Historically, Alakazam is the first Chinese/Japanese martial arts film that got theatrical distribution for mainstream audiences in Europe and America.

Although I was oblivious to everything as a child, Alakazam signaled the beginning of my fate and destiny. All who I am today, physically, emotionally, philosophically and spiritually, is a result of CF, kung fu films and martial arts.

Asian film…so what? This is what.