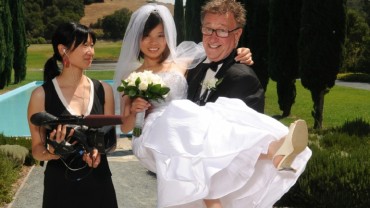 Documentaries and true stories bring us windows of someone else’s lives, where we can lay witness to the suffering and hardships of others. We in essence became Sunday, armchair quarterbacks expounding upon our own intuitive (usually pseudo-intuitive) sense of how he or she should have handled their situation, often boasting with, “Now if that was me…” bravado. At the end of the day, we really have no clue what we’d do until we’ve been in the situation.

Sunday, November 4, 2012, day 4 into the 13th Annual San Diego Asian Film Festival (SDAFF; as a writer we should never assume years down the road, a reader will extrapolate and figure out when everything occurs), the documentary Seeking Asian Female, and the based on a true story Eden, challenges us to face our own bad habits of judging others using the age-old, stupid book cover mentality and our pre- and misconceptions as how we would handle their situations.

Rule of thumb….open your eyes and close your egos…because never in our current lifetimes, will we be able to out quarterback the likes of Joe Montana, Joe Namath, Payton Manning or even Phil Rivers.

Taking six years to complete the film, the theme for Seeking Asian Female was originally about investigating the cultural phenomenon of Yellow Fever. I’m not talking about the mosquito-born disease that has killed millions of Americans over the year and has actually shaped several important aspects of American history (like moving the U.S. Capital away from Philadelphia), but a disease that seemingly affects millions of white Americans a year that can be quite bothersome to many female Asian Americans.

But either yellow fever can still bug the recipients.

Enter Steve, a man infected with yellow fever who has for decades been collecting  hundreds of letters and pictures in his quest to find a Chinese wife. Now at age 60, he’s wondering if he will have ever find a bride. He’s honest about himself, his internet picture shows his age, he admits he’s poor, no car, no house.

About giving up on his dream, Sandy, a 30-year old unmarried Chinese lady from Anhui, mainland China, her unwed status at her age making her an old maid in China, is interested in becoming his wife. When Sandy arrives…the film takes a different direction. 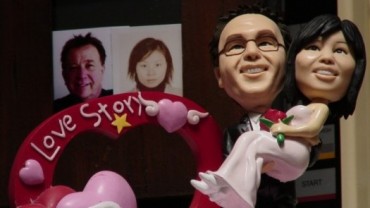 Suddenly film director Debbie Lum unwittingly becomes an integral part of the film’s plot where hanging in the balance is the fate of these prenuptials.

Lum was at SDAFF and during her post-screening Q&A shares about having to step over the line that documentary filmmakers try to avoid crossing, where now she is part of swaying the events or her subjects rather than being the proverbial fly on the wall.

“It was awkward,” she candidly blurts. I was put in this hard position when they called me as they were having their first fight, asking me to help out. I’m thinking, ‘Great, this is what is makes a film interesting.’ But they’re in the middle of a serious emotional moment, and I felt bad about it…but sometimes you have to be quite ruthless.

“I did this film because I’m tired of beings stared at, by all these white men, hitting on me and being objectified because I’m Asian. So the idea was to change the tables on them, point the camera at them, which I thought was a good idea.

“But with the growing situation of Steve and Sandy, my editor and advisor encouraged me to become the voice to guide things. Plus, Steve couldn’t ignore me, he always tried to talk to me and engage with me. Plus the thing about yellow fever, is that Asian women are not part of the conversation, so I thought that this way I can do that and give that female Asian American perspective.”

Lum had become, marriage counselor, translator, mediator and the go between.

“Sandy would vent her frustrations on me but I chose not to tell Steve everything. I was their mediator. But I thought whether this relationship is successful or fails, it can’t be because of me.”

The direction of the film is unique because of Lum’s intervention. So does a white man with yellow fever mean the man is sick, crazy, stupid, racist or what?

Lum closes admitting, “This is something that wasn’t in the film, but for all of his creepiness, Steve is a man with a good heart. He said that he’s not sure if things were going to work out but he really hoped that by Sandy coming to the United States, it can improve her life.”

With hundreds of hours of film on the cutting floor, Lum’s next project is to revisit the issue of yellow fever, but for Seeking Asian Female, the story of the couple was more compelling.

Next blog..The Garden of Eden, truly a place filled with evil snakes.