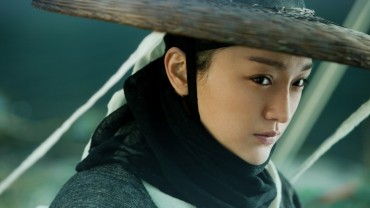 Last night was to me one of the biggest shocks of the festival…I was so blown away by this film that I couldn’t believe my eyes.

I’ve been covering film for over 20 years and like many film critics over the past couple of years, we’ve been bombarded with 3-D films. Many of these films have been created adding in 3-D effects during post production as a way to tap into it’s popularity. And of course many films have such high budgets that they can afford the best visual special effects houses and advanced technologies in the filmmaking world…but then there is Flying Swords of Dragon Gate.

By far, and no joke here, Flying Swords is the best example I’ve ever seen of a 3-D film. Right down to the opening shot where we have a bird’s eye POV (Point of View) shot that is flying between tall ship masts, where you’d expect to have these masts 3-D-ing into your face. However several times we were experiencing going through the masts where many audiences members literally jumped back in their seats.

Even the subtitles were rather whacky as they literally seemed to jump off the screen and be right in front of your eyes…very cool.

The scene where a huge swarm of crows flitter through a mountain pass was particularly engaging. The 3-D effect was so good that it seemed that the crows were literally flying past our heads from behind and flying into the screen. I notice many audience member looking behind them as if to say, “Where’d they come from?”

Flying Swords is actually the first “real” Fant-Asia film that has ever been seen at the SDAFF (as was Painted Skin: The Resurrection). “Real,” you say? Certainly in the past, outrageous Asian horror films, Japanese Xtreme gore fests and some over the top-ish martial arts films have graced the festival’s screens, but at the end of the day these films were labeled Fant-Asia as a result of the genre evolving to include films that went beyond the original scope of it’s foundation.

Not unlike martial arts movies that have now been delineated as Old School (a term usually referring to period piece Chinese kung fu movies made between 1966-1986), Fant-Asia has fallen into a similar dichotomy.

In case you came in late, when Western trained, new-wave filmmaker Tsui Hark directed Zu: Warriors from Magic Mountain in 1983, the movie rang in the Fant-Asia film era, an interesting unique genre that quickly evolved into a seductive wild mix of horror, sex, sorcery, fantasy, science fiction and swordplay films all uniquely egg-rolled into something that Western filmgoers could understandably digest entertainment wise. What Tsui did in Zu with a red sheet, some string and camera speed adjustments was mind numbing.

To the Chinese audience, Hong Kong’s advances in filmmaking techniques, optical effects and in some cases CGI could bring to the screen the magical and mythical qualities that the authors of kung-fu novels had intended to convey to their readers. These old school Fant-Asia films were basically revamped and stylized wuxia films injected with what most people associate with Hong Kong cinema of from 1983-1995: frenetic paced over-the-top action mixed with far-out sight gags and gravity defying wire-fu.

So the stars aligned and what better way is there than to screen a “neo-old school” Fant-Asia flick made by the father of Fant-Asia himself….Tsui Hark. Released in late December in 2011, Flying Swords, won the Best Action Choreography award at the 2011 Hong Kong Film Awards. The movie reunites Jet Li with Tsui, where Tsui’s love for the mystical, martial arts underworld of Jiang Hu returns to Dragon Gate Inn, a place where heroic swordsmen, vagabonds, eunuchs, treasure hunters and lovers collide.

The action sequences in Flying Swords were choreographed by two close friends of mine, Yuen Bun (I was his fight directing apprentice on CBS’ hit show Martial Law back in 2000) and Alan Lan, who was the lead child actor in my first martial arts film, The Flying Tigers and the Kung Fu Kids back in 1979, where he led 12 children on a mission to rescue me from a Japanese prison in WWII China…far out man.

The fight scenes were very reminiscent of two of Tsui’s best Fant-Asia films from the 1990s, the Jet Li starring Swordsman II (1992), and the Zhao Wen-zhuo (he replaced Jet Li in Tsui’s Once Upon a Time In China film franchise) starring Blade (1995).

Now, many of you may know that I started off as a stuntman/actor/fight choreographer in Chinese kung fu films and TV shows in 1979,  have been writing about martial arts movies for over 20 years and have a collection of over 5000 martial arts films….and at the end of the day, to me, Flying Swords is the best Fant-Asia film I’ve seen thus far. What more can I say?