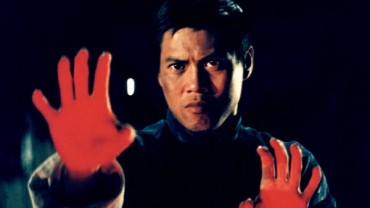 I really don’t know where to start this blog, there is so much to say that on a personal level, “opening night” blew my mind.

I mean, how many times do you get to meet a director who started a movie craze in the United States, watch the film that started the craze, then have the honor to actually sponsor said film?  For my wife Silvia and I….once in a lifetime.

But wait, before this gets going, let me let point out something before the festival folk stare at me like I’m losing my mind or track of time. The actual opening film of this year’s SDAFF was Thursday, November 1 at the North Park Birch Theatre with a most exceptional and inspiring film Don’t Stop Believin’: Everyman’s Journey, where the audience screamed like a submarine commander, “Down Perryscope, Up Pinedascope.” (Did anyone get that one?)

Anyhoo, since I’ve been covering the SDAFF circa 2007, opening night to me has always been the first film at the Ultrastar, this year that film being Five Fingers of Death, thus in my warped mind…it’s the opening night film.

One of the way coolest things about covering the festival is that once a year, I reconnect with all my outstanding and upstanding SDAFF pals, where through the yearly hugs, handshakes and “long time no see” conversations, there’s a certain brotherhood and sisterhood that is as bright as a lighthouse beam shining out toward the darkened ocean….the sun machine is coming down and we’re going to have a party.

Arriving at 5:00 pm, I’m given a program by one of the many bright eyed volunteers at the main entrance, grab my press pass, my wife snags her movie passes (we’ve been SDAFF/Pac-Arts Movement member for several years now) and we’re good to go…that is go into the lobby areas to woof down some cheese and eggrolls, yummmmmm.

And there it is…the official Five Fingers of Death movie poster….eight track flashback, the last time I saw that was when I saw the English dubbed version of Five Fingers back in April of 1973.

Fielding question about why sponsor the film, why my interest in martial arts films and any final words, I’m thinking, “How much time left do you have on the camera?”

But, to some certain extent, through the nervousness, I did control myself…somewhat, kept the answers concise (whoever watches the thing will be the better judge of that…drop me an email and lie how well I did please).

Then my wife and I are asked, “Would you like to meet the director?” Would I like to meet Korean director Chung Chang-wha’s (Chinese name Chang Cheng-ho)?   Do pintos explode?

In case you might not know, in the early 70s, about the time Five Fingers was made in Hong Kong, the Ford pinto was a car with a rear gas tank that was angled upward, so you could see thing if you drove behind one.  Whenever there was a back end collision on the car….boom!  So yes, pinto’s do explode and I got to meet the director.

As I’m shaking his hand, for some insane reason (actually it was rather obvious) I remember that when shaking the hand of a Korean elder, you’re supposed to rest part of your left hand on your right upper wrist, I’m sort of stuttering out the words he’s heard 1.3256 million times before, “I’m honored to meet you, great film, can you read my script please.”

Then the translator cuts in and in a heavy gutteral, Korean-English accent, Chung thanks me for the compliment. When I shared that I was a stuntman in Chinese kung fu films in the late 1970’s and did the various universal mimes revealing aches and pains from all the “accidents” (i.e. the token white guy being the Chinese punching bag) of getting beat up by a different kung fu star every couple months. He ganders at me and shakes my hand.

A few picture with Silvia, Chung and I in front of the Five Fingers poster, of which we couldn’t see the poster in the photo…a final handshake, my trying to impress him by saying, “Gamsa habnida” (“thank you”) and off to the film.

Packed house later, Lee Ann Kim gives the intros and announces that Vivalachi, Alternative Health and Wellness Services is the sponsor…yep, Silvia and I’s business. A wee cheer from a handful of good friends (Kako, her sensei, Kevin, Aya and Bob – a handful of five fingers of life – we have balance – thank you for all coming out) then a roar from the crowd to the visiting director sitting in the middle of the audience. 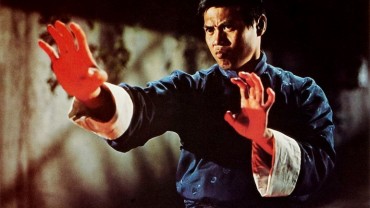 The movie starts, there’s a ton of “oooohs” and “aaaahs,” gleeful and knowing childish giggles from the audience…it’s a 1972 Chinese kung fu film with a typical Chinese story of heroes, betrayal, revenge, blood squirts, obvious villains, sly and wry laughter from those villains, funny English subtitles, over and under acting, evil Japanese martial arts, ripped off musical scores from Japanese film and U.S. television and of course…the fights.

I hope you all noticed how the fights were shot. Not like typical Hollywood affairs, close-up angles, just a couple of techniques per shot, MTV snap editing, and you can’t see what the actors are really doing (because most times they don’t)…yet in Five Fingers…wide angles, up to 20 different technique per shot, you can see what the actors are doing, and even though most of the actor don’t practice martial arts, they did okay (and that’s because of the fight choreographer Liu Chia-rong).

Film over…maniacal applause and Phi Lorenzo does the Q&A. Chung’s English is as good as my Mongolian, thank goodness for the translator. He joyously answers questions about the craziness of being a Korean director, with a Japanese film crew directing Chinese actors, is appreciative of the SDAFF’s recognition for his accomplishments, talks about how they made the heroes hands turn red (the power of the iron palm) by shining a red light on them….and then there’s time for one question from the audience.

Hand zipping up faster than dragonfly on drugs (a dragonfly has the instantaneous air speed acceleration of 60 mph), Phil smirks and walks toward me. He shares about my book, The Ultimate Guide to the Martial Arts Movies of the 1970s, in the film circles considered a landmark book on martial arts cinema…thus the perhaps the expectation of a deeeep question…not.

I ask, “Why the different titles of King Boxer and Five Fingers of Death and do you practice martial arts?” Chung explains he came up with Five Fingers and it was the working title, but the producer Run Run Shaw likeD King Boxer…thus end of story. He doesn’t practice martial arts but spent three months studying Chinese history in preparation for the film and it’s historical foundation.

Party over, my pal Bob, who drove like a madman from LA to get to the film, leaving Santa Monica at 2:30 pm…traffic jams later arriving at the Ultrastar in SD at 6:25 pm…yes, he wanted to see the film in a bad way (incidently his last name is Badway), had not eaten in 10 hours. We sauntered over to Applebees. It’s about 9:30 pm, dark, desolate, there’s only three people outside on the upper deck…

…I introduced Bob to director Chung. End of a perfect evening.