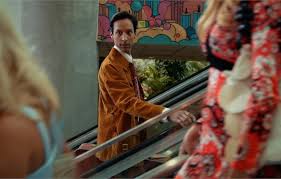 The Pacific Arts Movement is about forwarding the cause of Asian arts and artists regardless of country, gender, sexual proclivity, race, color and this year more deliberately…religion. Look no further than at the 17th Annual San Diego Asian Film Festival Guide, it’s cover art a chic representation of a Muslim woman wearing a multi-colored hijab.

Artistic director Brian Hu shares, “I thought about the issues that Asian communities face today and Islamophobia is a big part of that. This year it’s been heavily spoken about in America and internationally. We wanted to show this is important to us. For the design, we wanted something hip and colorful so it might get people to recalibrate their idea of what a Muslim woman looks like wearing a hijab in public. It’s based on the electrifying actress Sonita Alizadeh in this year’s film Sonita, who as a teen fled from Afghanistan to Iran with her family to escape the Taliban, where she decided to become a badass rapper. 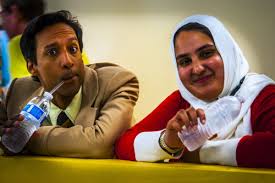 “We also wanted to remind audiences that our festival just isn’t about East Asia (China, Japan, Korea) so we show films from like Pakistan and Iran, and we’re proud of that.”

So what better way is there for SDAFF to kick off this social awareness pride than by having the opening night film feature a comedy directed by Luna Khan, a Muslim woman who is also a graduate of UCLA’s prestigious School of Theater, Film and Television.

Her face bright as a full moon during the mid-Autumn festival, Luna explained during an interview on patheos.com that her dad used to tell her all kinds of intriguing stories.

“He told me about his father in India, a local legend and tiger hunter at a time when tigers destroyed entire farms,” she enthused. “Also stories about somebody who broke somebody’s toilet then stole their stool sample in order to get a Visa into America. About roommates in the ’70s who came up with clever plans to drive their junky car across town with no brakes. He told me funny tales I would never know about from any other source.

“Then one day, after searching for ideas for a feature film, my boss at a production company listened to these stories for two hours then said, “There is your movie.”‘ 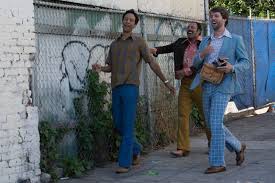 he Tiger Hunter yarn begins with wee Sami Malik being proudly bombarded by local villagers on how is father, a great tiger hunter and protector of the village, is so well loved and highly respected. He dreams of being like his father. Adding to his pipe dream furor is that his childhood sweetheart Ruby tells him how lucky he is to have such an amazing dad. By 1979 and armed with an engineering degree, Sami (Danny Pudi) is a highly motivated young man with ambitions to live up to his dad’s legacy and impress the gem of his heart by taking a job in Chicago and finding the American dream.

But the stars in the night sky and the twinkle in his eye quickly lose their luster as he ends up taking a nowhere job from the downsizing company that promised him a somewhere job. Spirits down, bubble burst and the wool pulled over his eyes, he is rescued by the well intentioned Babu (Rizwan Manji), who with a sheepish grin invites Sami to be his roommate…along with a dozen more well-educated, off the wall South Asian brethren living in a microwave-sized apartment. Sami has 30 comical days to prove his metal as a engineer ore he’ll be shipped back to India empty handed and certainly broken hearted. 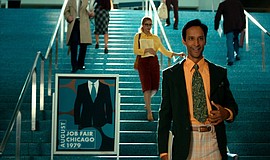 Tiger Hunter embraces the fish out of water humorous arcs as new arrivals try to make ends meat in America’s culturally diverse landscape without ending up swimming with sharks. Rife with the expected cultural foot-in-mouth circumstances and mistaken double meaning language folly, Luna’s comedic setups intelligently avoid cheesy stereotypes and doesn’t rely on racist or demeaning attitudes to win our hearts of her heroes trying to assimilate into America.

It’s an honest film that celebrates what makes America a bastion of hope…our cultural diversity.

Final thought. How many of you noted that Sami was sometimes wearing orange with black? Metaphorically, perhaps he was one with the tiger without being a tiger, i.e., the unspoken bond of love Sami’s father had for Sami.