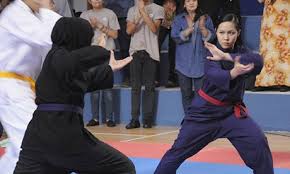 For most of us that probably have no idea what life or the culture of Brunei is like, an Islamic state on the north coast of the island of Borneo, how cool is it that last night’s Rocky (1975) meets Karate Kid (Hillary Swank’s 1994 The Next Karate Kid) inspired film Yasmine, is not only the first film ever produced in Brunei, but it’s also a martial arts movie. Yasmine paints a picture not unlike any American high school girl’s coming of age story…peer pressure, attraction to boys and her challenging fight for independence from her strict, single-parent dad’s inability to accept her adolescent pinings and desire to learn pencak silat martial arts.

Why does the titular character Yasmine (Liyana Yus) want to learn silat? For all the wrong reasons…to fight her high school nemesis and silat expert Dewi at an upcoming silat tournament and to also win over her childhood sweetheart and silat champion Ali, who is back in town. When Yasmine connects that Dewi is Ali’s new girlfriend, she freaks out and her yen for victory becomes even stronger. Yet that is dampened when her father enrolls her in a strict Muslim school where she chooses to wear a red headscarf, a symbol of her individuality in school hierarchy of conservatism.

Yet having a female learning the secrets of silat martial arts is not as crazy as some may think. Let’s look into the style’s history and purpose.

Chinese diplomats visited Persia in 126 BC. Years later, Persia created the martial arts varzesh-e pahlavani that used low stances and kicks. Persian explorers visited South East Asia in 0000, and by AD 226 they had established trade routes with the Malays. By the 700’s Arab Muslims arrived in the Malays. Although the term pencak silat was chosen in 1948 to be a unifying term to describe Indonesian martial arts, silat is proferred to originate sometime during the ancient powerful Malay empire of Srivijaya (600s-1200s) and became more refined during the ensuing Majaphit empire (1293-1527). 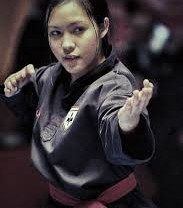 Several legends dictate that females created silat. Bima founded the silat style Bima Sakti. She developed the philosophy…never be the first to strike, and even if hit, try never to hit back. Another version tells that Rama Sukana used monkey movements to avoid being beaten by her husband, skills she learned from observing monkeys fighting each other (some folktales tell monkey vs. tiger) while washing clothes on Bawean Island (north coast of Java).

Varzesh-e pahlavani eventually became seeped in Sufism spirituality. The only other arts in the world to adopt Sufism are the silat arts…a Persian Muslim/Sufism connection. Indonesian silat fighters’ historical success against Dutch and Japanese invasions have been attributed to the mystical practice and the manipulation of a warrior’s tenaga dalam. Perhaps it is similar to Chinese chi gong, which traces it’s roots back to 3000 BC. Similar to Shaolin martial arts, silat is also heavy into animalism and spiritualism. Understanding tenaga dalam and Indonesia’s religious history goes hand in hand with pencak silat. In fact, silat is an art seeped in Muslim thought, so by understanding their religion makes the practitioner a better martial artist and person.

Yasmine’s first silat teacher in the film claims to be a master of tenaga dalam but the film chooses not to get into it and considering Yasmine is a family movie, the action is lightweight compared to the recent popular silat-based The Raid film film series. However, after devoting several months of practicing kuntai, a version of silat originating from Brunei, Uys was ready for her character’s fight choreography style as created by Chan Man-ching, a long time fight choreographer for Jackie Chan.

Yet throughout the journey, at the end of the day, it’s the silat that brings Yasmine peace, love, friendship and a deeper understanding of herself and life. It’s almost as if Yasmine was walking in the footsteps of silat’s foremothers.