Last night’s (Nov. 12) screening of the Taiwanese baseball film Kano made you feel like you were at a real game…both run for three hours…accept last night we got to see all the highlights. There were also hotdogs in the UltraStar lobby for those that wanted a more be-at-the-ballpark feel. What the film lacked were players spitting up buckets of sputum in the dugout and field, hotshots constantly doing the M.J. Jackson grab, crazy beards and moustaches, and players carrying big butts and heavy paychecks…in other words, this  true-story featured players engulfed in real passion toward their sport.

Set in the Southern Taiwan county of Chia-yi (Kagi in Japanese) in 1931, when Taiwan was a Chinese province under the paralyzing rule of Japan (1895-1945), the film tells the story of how a bunch of loser, high school farm boys from Kano (an abbreviated name for the Kagi Agricultural and Forestry Public School), within one year, went from zeroes to heroes, when they reached the finals of Japan’s highly touted national high school baseball championships in Koshien. 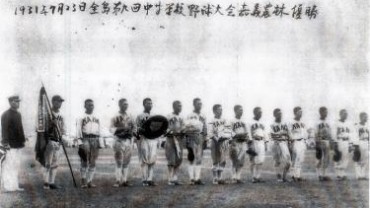 Taiwan was ceded to Japan after the Chinese Ching dynasty lost the First Sino-Japanese war (1894-1895). So considering the time in history, what was even more amazing about Kano was that they were not only a multicultural, team of three races…five Japanese, four Han Chinese and three Taiwanese aborigines (only one Japanese player was in the team’s starting nine)…but their inspired and spirited performance also laid the foundation for Taiwan’s professional sports development program. Talk about a lot being placed on the shoulders of 12 high school kids.

If you didn’t know any better, you’d think that the Japanese were super friendly and benevolent to their captors, if you will, and the Taiwanese were cool with their situation. When I lived in Taiwan back in the ’70s, there was a still a sector of the population that felt Taiwan grew and prospered under Japanese rule. So at the end of the day (by the way, screenwriters constantly say this), the film is about how these underdogs won-over their rulers not by winning the game but by winning their hearts, as each player played their hearts out…a true, gritty, blood and guts, crawl across the finish line if they have to, performance…something a culture seeped in samurai tradition could admire and respect.

At the core of these rascally, happy go-lucky kids is their Japanese coach Kondo, who was shamed at the high school level of coaching in Japan, and moved to Taiwan to start anew as a bookkeeper teacher at Kano. Kondo reluctantly agrees to teach baseball in gym class but his passion for the sport clicks on as he trains the participants like they were a real team, using his tough as nails, uber-disciplined approach to coaching.

Suddenly, each player becomes each player’s best friends…think black and white athletes being best friends in 1950s Alabama to measure that significance. After a grueling game played in the pouring rain and muddy, grassless field against South Taiwan’s best high school baseball team made up of all Japanese nationals, pure golden magic occurs…lights, camera, action…even if you’re not into baseball, it’s Rocky time as you also get caught up in dreaming the impossible dream.

The use of papaya fruit as a means for the players to understand how each team member can support the other regardless of any situation, comes to a fruitful comical climax in the final games. It’s a bit out of place, but cheers to the botanical try.

The beautiful thing about this film, is that the players were not trying to prove that they being the downtrodden, second-class citizens being ruled by Japan are as good or better than any Japanese, they’re simply just baseball players that will do anything to win fairly and not do it as a tool to thumb up their noses at anyone…like we constantly see in American high school sports. It would be great if there was a shorter version of Kano out there that could be required viewing in high school gym classes in America…so they could learn the true art of what it is to be a team literally against all odds, and not do it for that scholarship, and the fame and fortune of a pro-career.

Famous Japanese playwright Kan Kikuchi was noted as saying, “Seeing the homelanders (Japanese), islanders (Taiwanese) and Taksago (aborigines) working together in harmony despite their racial differences really moved me to tears.” Kano was even dubbed by the Japanese press as champions of all under heaven.