JOURNEY TO THE WEST: A Monk Evicts Time 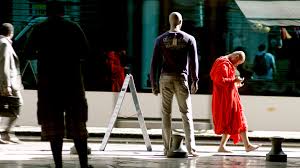 Since the beginning of the festival, I hear joking comments about last night’s film, Journey to the West, that it’s basically just a bald headed guy (Lee Kang-sheng), dressed in a Buddhist monk’s red robe, who with his neck protruding forward, head bowed, staring at the ground and the fingers on each hand held in a circular fashion (wheels of life), walks with an excruciating snail pace around Marseille, France for one hour. Really? That’s sounds more wacky than trying to save a fish from drowning.

How could I not watch a film like that…the sheer curiosity was killing me alone. So I took the plunge as did 40 or so other avid filmgoers (you got to be avid or nuts to take this one on), sat down, after supper, in a food coma, on a sofa-like comfortable lounge chair. I feel 40 winks coming on…if you get my drift, wink, wink, 40 of us, say no more. I’d also be willing to think that most of the audience isn’t into snails and preferred fast food. Time will tell.

Directed by the Malaysian Chinese Tsai Ming-liang, of which I’ve seen two of his films, Vive l’amour (also playing at SDAFF 2014) and Goodbye, Dragon Inn, the later starring also starring Lee, I was prepared for Tsai’s long takes and “slow” pace.

Let’s clear up something first. The English title, Journey to the West, can easily be misinterpreted as loosely based on the classical Chinese kung fu novel Xi You Ji (literal translation, Travel West Journal (aka Journey to the West), a story about how the famed Monkey King and two of his friends protect a Buddhist monk on a mission to find special Buddhist scriptures. Tsai’s film in Chinese, Xi Yo, means Travel West, and features a monk that travels West to Marsielle, and that’s the similarities. Maybe another film could be shot in New York City, which would make the film Travel Far West. 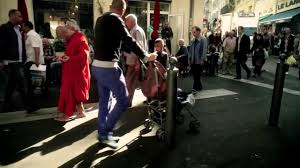 After 14, beautifully setup enchanting shots, one gets entranced first by the deliberate, uni-paced speed of each step and then by the natural background sounds of the various stairwells and streets. With his bright red robe, Lee sticks out like a sore thumb. But then as he sloths along, one begins to take more notice of the people around him. Annoyed, amazed, oblivious, entertained, curious…just a handful of emotion one can garnish from the way standing and passing crowds interact with this slow-motion Asian dude, who for all intents and purposes is deliberately hiding in plain sight.

The centerpiece “scene” is a 14-minute shot when Lee descends down a long staircase…either to a subway or to an underpass. With the ambient light to his back, it gives Lee that monk halo image like he’s become one with the world and has reached the key moment of a spiritual quest…the understanding of “this, this.”

At this point, I sneak around in the dark and noticed over half the audience was asleep (20 winks). By the time I got back to my seat, a girl off-screen, let out a loud scream in the stairwell…perhaps a Tsai-deliberate, well-timed alarm to “wake” the audience who will surely now be ready to witness the final part of Lee’s cinematic journey focused awake…or not.

In celebration of this film, I wrote this piece with the snail-pace typing, three words per minute, thus it’s appearance on the SDAFF website, 26 hours after the film’s screening.