FROM WHAT IS BEFORE: Tell it to the Kapre 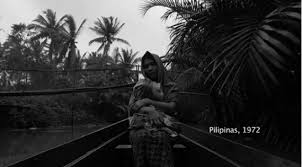 Over the past week, I’ve watched a loooong, three-hour film (Kano) and an hour film shot in “slow motion” (Journey to the West). But was I ready for a combination of the two…was my butt ready to sit and watch Filipino director Lav Diaz’s five and a half hour epic From What is Before…miss three normal length movies,  hold back the bathroom urges, stay awake? Diaz makes Lav-ely films but he’s also known for looooooong movies (notice more “o”s than Kano) and loooong establishing shots. Thirty of us went for it.

First thing you’ll notice is the establishing shot of the rain falling in a jungle, followed by a cow bursting out of the jungle 20 years later as it sloughs around in the mud for three years, stumbles off-screen and then we hear weird mooing sounds. Then there’s a wide angle shot of angst-ridden winds blowing over the grassy rolling hillsides as we see a handful of specs on the horizon that slowly move toward camera…bigger, bigger, bigger…and four months later, the specs, now human beings, are in some kind of a funeral procession as they silently walk past the camera. Since as we get older and time flies by faster each year, the above 25-year long shots, are actually over faster than you think. 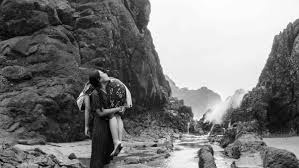 Although each shot is an establishing or master shot and there’s never any coverage, camera placement is always perfect. The deliberate ways that the characters silently perform menial tasks, mumble simple dialogue or amble in- and out-of-frame during the single take, all successfully set each scene’s mood and emotion.

The film starts in 1970, and because it’s shot in black and white, it adds a deeper eeriness to the clarity of the people and the landscape of this god forsaken, rainy, dark and dank village near the ocean, where the jungle is writhe with creepy stories of Filipino folklore.

As strange as this sounds, it’s all rather comforting to watch…this coming from a fan of fast paced action films and martial arts mayhem. For the first two hours or so, we’re introduced to a handful of important characters that exist in this back jungle barrio in the middle of nowhere, Philippines, where everyone slowly strolls around in the slushy mud in bare feet: old farmer Sito who keeps chanting, “Deliver us from evil, deliver us from evil.”; Tony the winemaker, whose face is as distant as the long shots and has a dark behavioral side; little lost Hakob, Sito’s nephew, who misses his parents and longs to return to them; Itang or Pacita, the names change throughout the film…not sure if it’s her given name or a job description; peddler Heding, a nosy, bizarre lady that cackles, giggles and breaks into people’s huts; Father Quido, makes me think about a mafia hitman or a Saturday Night Live character; and Itang’s severely mentally and physically disturbed sister, Joselina, who seems to be the crux of everything good or evil happening in this barrio. 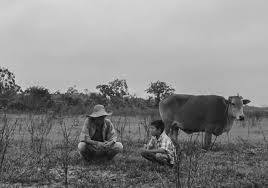 People have been leaving the barrio because rumor has it, that it’s cursed. Body-slashed and gutted cows have been found in the fields, nightly moans emanate from the jungle, a contorted dead body lies in the middle of the road, fang marks on his neck…he’s been bitten by an aswang, huts have been mysteriously set ablaze and razed to the ground, and Joselina has become more insane as strange marks appear all over her body.

Then comes an important part of the film….the mention of the Kapre. Oh, yeah, this film just got more intense. In fact, the mere mention of the aswang also adds a mythical dimension to the film, it’s significance perhaps lost with non-Filipino audiences. But since I saw the Filipino horror film Ang Pamana in SDAFF 2008, to me, everything was making perfect sense.

The Kapre is a mythical tree demon that hangs out in acacia, mango and bamboo trees, that if it befriends a human, especially the love of a woman, it will be around the woman her whole life. By playing pranks, making strange sounds in the jungle, rustling leaves when it’s not windy, it can confuse people and cause them to get lost.

An aswang, the most feared mythical creature of the Philippines, is a vampire-werewolf witch that eats unborn fetuses by sucking the children out of the mother’s womb. They use strange Tik-Tik sounds to confuse potential prey and can wail like a hen laying an egg. Dead livestock is a telling sign and when they befriend a human, they can talk to you with crazy laughter and can feel sadness, anger and envy.

That being said, Diaz implies that some characters in the film could either be a shapeshifting Kapre or an aswang, so keep these thing in mind when you watch the movie. Furthermore, toward the end of the movie, new characters arise and as we “speed” toward the climax that is tied into an important event in Philippine history, you will maybe think and see that the aswang is not as literal as it is figurative.