VANCOUVER ASAHI: A Diamond in the Rough and Cracker Jack Film 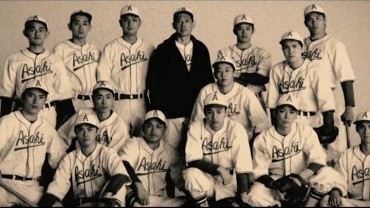 Although opening night for the 2014 SDAFF was Thursday, November 6, which featured the scintillatingly successful Return of the Green Dragon (nope, not a martial arts title), a movie I was sadly unable to take in, last night was my eighth opening SDAFF night at UltraStar Cinema Mission Valley at the Hazard Center. The San Francisco Giants have recently won the World Series…a tournament only open to American baseball teams (and one oft rag tag, under paid Canadian team), but a pre-World War II world away was a baseball happening that today’s world is totally oblivious to its significance…and here I am in Theater 1 becoming privy to the true tale of a historically obscure rag tag, underpaid Canadian baseball team’s rise in Vancouver Asahi.

Quick side note, I’ve been covering film for 23 years, and the new luxurious seats at the UltraStar makes me feel like I’m back home on my sofa. They’re the most comfortable seats at a cinema I’ve ever experienced, they’re truly a couch potato’s theater of dreams…if they build them, they will come.

Wide awake but vegging out on the sofa, as the film moves along it reminds of the film Lagaan: Once Upon a Time in India (2001), a Bollywood film where a group of pissed off at the local ruthless British colonial rulers Indian villagers, stake their village’s future by challenging the smug British to a cricket match. Being British, I was slightly torn by the way the British were portrayed and the constant insults in Hindi being rightly tossed at them throughout the film. Not all British are schmucks and the film does beautifully represent the sentiment as the well-to-do fiancée of the high ranking military officer and captain of the British cricket team, breaks ranks and helps the Indians defeat the British. Jolly good show and all that rot.

Although to Americans, Vancouver Asahi, which means morning sun, sounds like a kind of sushi fished out of Vancouver’s Strait of Georgia, in reality it is a baseball team founded in 1914 by first generation Canadian Japanese who at the end of the day are fish out of water. They’re trying to find a link between their parents’ traditional and sometimes destructive Japanese values and their new, evil white man-infested country that also happens to be a member of the British Commonwealth. And 100 years later, close call on Scotland’s bid to leave the Commonwealth.

Unfortunately, the Asahi is akin to Charlie Brown’s baseball team, they never win and never score. Their excuse? One Asahi bemoans, “They’re so big.”

Directed by Ishii Yuya and starring Tsumabuki Satoshi as Reiji (pronounced Reggie; nod to Yankee Reggie Jackson) and Kamenashi Kazuya as Roy (nod to another famous black Yankee player Roy White), the high production value film centers around the current situation of the Japanese immigrants struggling at the dawn of World War II in Vancouver. As the old Japanese men drink themselves under the table every night and cheer loudly that their mother country has invaded China, they don’t realize that the repercussions of Japan’s warring ways will further distance them from their Canadian neighbors…in more ways than one.

Amid the Canadian racist attitudes and the dwindling jobs for the Japanese workers, which occurred at the hand of Canada’s growing distrust, Japantown is also rapidly declining into the mists of yesteryear. The town leaders look toward the Asahi as a possible hope to making life more tolerable during an intolerable time, and importantly, as a way to connect with the Canadians.

However, due to the unemployment situation, the Asahi’s best hitters leave town and the mild-mannered Reiji is more shocked than being tossed into a tank of electric unagi when he’s appointed to be the team’s new captain. As they continue their losing ways, the players and Japanese community become further disenchanted and sink deeper into their ocean of self pity. 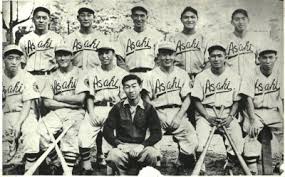 But then an accidental moment of magic will change the direction of the team, Japantown and the attitudes of the surrounding Canadian communities toward the Japanese…the invention of brainball. There’s no need to fear, the underdogs are here, love is in the air, inspiration abounds, take me out to the ballpark emotions are running high, and Japantown is no longer engulfed in a frown.

Then the shitaki mushrooms hit the fan…Pearl Harbor.

Yet with all the doom and gloom that came from this unprovoked attack, when Reiji thanks his father for coming to Canada and giving him the opportunity to discover baseball…you realize that all is not lost.

The Asahi were inducted into the Canadian Baseball of Fame in 2003.