LIMITED PARTNERSHIP: 40 Years in the Making 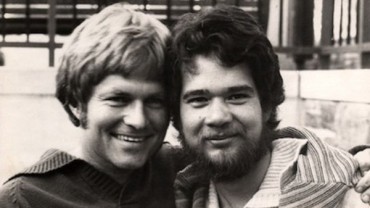 While watching yesterday’s screening (Nov. 9) of the ultra-engaging documentary Limited Partnership at SDAFF 2014, a film that tells the 40-year love story of a gay couple, Filipino American Richard Adams and Australian Tony Sullivan, who were “legally” married in 1975 in Boulder, Colorado…one’s mind can reflect on how things you didn’t know were in your face, were in your face…you just didn’t recognize it.

Shortly after what you would consider to be one of lives most joyful experiences, the sanctity of marriage, which these days is all to often becoming somewhat grain of salt-ish, their lives were pepper sprayed after Sullivan’s application for a green card was denied with the Immigration and Naturalization Service’s demeaning response, “You have failed to establish that a bona fide marital relationship can exist between two faggots.” Salt was added to their wounded broken hearts when the Colorado state’s attorney about faced and with blind injustice ruled that their marriage license was invalid.

Outraged by this letter, the couple sued the U.S. government by filing the first federal lawsuit seeking equal treatment for a same-sex marriage in U.S. history. It failed.

Sword stolen, it seemed that Lady Justice’s blindfold was removed and once again in U.S. history her scales were tipped by fear, ignorance and hatred.

Thus began a surreptitious love story that challenged the cliché, “Love can conquer all.”

With threats of deportation looming overhead, no one was going to force this couple apart, not the United States, not Australia and not even Sullivan’s mum who disowned and disinherited him. How can one avoid deportation? Leave the country on your own free will before you’re disparagingly dragged away. They had always wanted to visit their friends in Europe…unfortunately they now had the perfect excuse. But of course LA was their home, so thanks to the Mexican border at San Diego, partly funded by all the taxes Adams paid throughout his life, they were able to visit America and live under the radar in order to avoid official notice.

The documentary’s evolution (evolution being another subject that threatens the minds of many) began in 2001 when director Tom Miller began working on a project about examining the effects of U.S. immigration laws on gay couples. However, after filming Tony and Richard in 2002, the documentary didn’t materialize. Yet as the steadfast gay movement grew, Miller was astute and kept in regular contact with Tony and Richard, which became the ground work, footwork and ground breaking results of Limited Partnership.

As other life changing events occurred in Tony and Richard’s lives, the documentary became fuller and more emboldened as the story was reaching peaks the filmmakers didn’t foresee, making the movie an even more captivating saga of love, patience and togetherness.

In SDAFF continuing efforts to bring more magic to their movie, Tony Sullivan was at the screening and spoke to the audience. When asked if he felt he was being courageous throughout the good fight he simply shared, “No. It’s part of my makeup. I’ve had the word hero and courageous applied to what I do. I tend to shay away form such terms. Richard and I ware just two people who loved each other and doing what to us seemed right. We really deeply believe that no one has the authority to interfere with people who love each other.

As I was watching this film, two things kept popping up in my mind.

Rich stood there bright as the sun on that California coast
Tony was an Aussie boy on his own
Rich looked at him with those soft eyes,
so innocent and brown
Tony knew right then he was too far from home.

Tony headed west ’cause he felt that a change would do him good
Visit LA, good for the soul
Rich was born with a face that would let him get his way
Tony had lost all control

Night after night, day after day, it went on and on
Then came that day a bolder marriage of chrome
They spent all night staring down at the lights of LA
Tony knew he could ever go home

Second: When I attended Cornell University in 1976-79, one of my best friends at school, Tim, was gay, but like many other others back then, he never told anyone about it and didn’t walk around with that stereotypical flamboyant air or façade commonly portrayed by homosexual characters in film.

We were both into Asian culture and I assumed Asian women. One night, as high I was heading out to the Chinese Student Association disco party, I bumped into Tim who was also heading out to a disco party…in the opposite direction. It was at that moment that he told me he was gay. We both laughed our heads off when he explained that originally he didn’t like me two years ago, because he worried that if I was gay I would be his competition…he liked Asian men. I wonder how Tim is doing today.