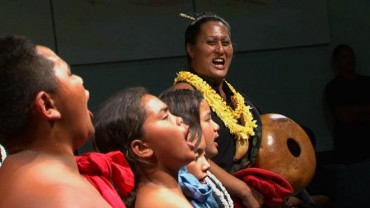 Frocked in a swirling green and orange Hawaiian dress, with an ornate but subtle flower-based headdress, the proud mahu (Hawaiian transgendered) Kuma Hina or teacher Hina, slowly processions to the front of the movie theater and stands before the audience. From the back of the theater, two men, singing one at a time in Hawaiian, make their way down the aisle. One of the men is carrying a long green lei, approaches Kuma Hina (formerly Collin, aka Hinaleimoana Wong-Kalu) and gently places it around her neck. The energy is right to begin the film.

Although gender non-conformists are globally demeaned and wronged, the titular character of the documentary Kuma Hina paints an intimate portrait of a once ridiculed teen-boy, hula dancer who realized his place and body in the world were about to change. By imposing a bold sense of self-assuredness upon herself and those that surround her, she teaches her students to have deep respect for their learnings of ancient Hawaiian culture and traditions, pursues her place in Hawaii as a community leader, and searches to find true, romantic love. 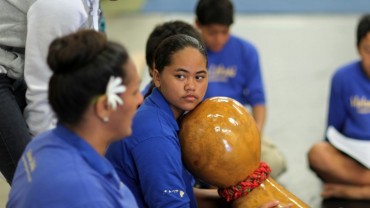 Directors Dean Hamer and Joe Wilson unfalteringly but reverently casts Kuma Hina in light that displays her steadfast dedication and serious devotion to prepare her haumana (students)  for a year-end cultural performance at the Halau Lokahi Public Charger School. She finds a reflection of herself in a tomboyish young girl named Ho’onani who steps up to the plate and hits a homerun as she becomes the leader of the performing boys’ hula troupe.

Wilson and Hamer shared with the SDAFF audience that this direction in the documentary was not intended, it just naturally happened one day when they visited the school and were awestruck by the troupe in training being manhandled by Ho’onani or as the film delineates, a young mahu. They had found what every narrative documentary filmmaker seeks in their subject matter…that unexpected organic direction that gives the film a good beginning, middle and end.

We are witness to Kuma Hina’s commitment to improving the overall well being of her people, as revealed by her forcefully controlled thumbprint as chair of the O’ahu Island Burial Council. She knows so well about the importance of change in her own life but also towards Hawaii’s growth as she doesn’t strongly oppose construction of O’ahu’s new rail system but insists that ancient burial grounds must above all be honored. 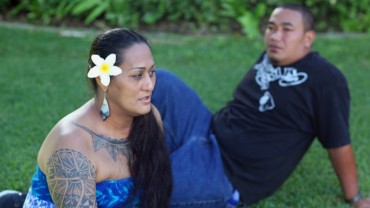 In her search for romantic fulfillment, Kuma Hina takes her chance by marrying Hema, an erratic 15-years younger and erratic bushman Tongan farmer who finds adapting to the big city life in Honolulu tough. Amid Hema’s swearing and emotional abuse toward Kuma Hina, and his own undying passion for hanging out with his Tonga friends and drinking kava root juice, a drink laced with sedative and anesthetic properties, it’s unclear as to how successful this part of Kuma Hina’s journey will be.

Kuma Hina shares, “I didn’t want this to be a transgender film that was about other elements of transgenders, but a movie with a solid cultural ground and meaning. As time passed, that was one of the final underpinning that brought life into the film and I feel comfortable and good about it. Though the mahu elements clearly ring throughout, the film still speaks about inclusion, about culture and we have rooted ourselves to something we can be responsible to.

“I would add that I don’t choose to embrace or identify myself with GLBT films because it pigeonholes individuals into being something that a wider outside community will keep repeating. Here is where I’m coming from. The United States of America and the Western construct of life and living here on the continent is not my mainland. My center of being is Hawaii, my mainland is Hawaii, my home is Hawaii, my culture is kanaka (Native Hawaiian), and these are what I’ll ground myself to…and by doing that, it allows me the freedom to simply be and lead a more fluid existence and life. Yet when I come to the American continent I will roll with what the environment brings.

“But with that being said, it doesn’t diminish the great work as far as the GLBT issues are concerned. What is smart to say is that we all come from different parts of the world and we all have our own world views…and the kanaka world is my world view.”