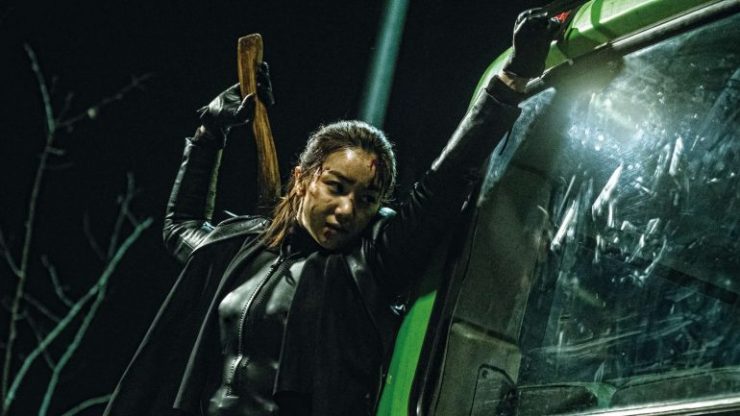 Something dawned on me last week. This past summer, Hollywood has churned out more blockbuster films this year featuring characters that are skilled martial artists than in previous years: Guardians of the Galaxy II; Wonder Woman; Valerian and the City of a Thousand Planets; Atomic Blonde; Hitman’s Bodyguard; American Assassin; Kingsman: The Golden Circle; Bladerunner 2047; and I’ll include January 2017’s release of John Wick: Chapter 2. What’s different about these films compared to other years? None of the movie characters are Asian.

Hollywood has borrowed Asian talent, fight and camera choreography skills and have created their own talent and version of doing fight scenes. The fights are pretty good. However, after you watch last night’s South Korean film The Villainess and the night before Paradox, you quickly see what’s lacking in Hollywood; artistically creative quality, something new and those ultra-cool moments that remind you that Asia is still the master of making martial arts films. Thus it’s no coincidence that SDAFF 2017 featured these films, which both were release a mere couple of months ago or so.

Sooh-hee (Kim Ok-bin) is a mentally disturbed, ballistic-bladed assassin who upon failing to kill her father’s murderer is surreptitiously re-trained by a covert group of assassins to be a calmer, more deadly, hatchet slashing killer where if she doesn’t do their bidding, her cute wee daughter and second husband will be slaughtered.

Reviews of Villainess, which was directed by former stuntman wannabe Jung Byung-gil (Action Boys), touted Sooh-hee as the female John Wick (JW) and that her action performance was superior to Charleze Theron in Atomic Blonde (AB). This sort of bluster is made by critics who don’t understand the genre and thus claims things that aren’t.

Some Korean filmmakers have made their mark based on the inventive use of how their movies were filmed like Park Chan-wook’s Night Fishing (2011) that was entirely shot by iPhone and Bon Joon-ho’s Influenza (2004), which used security cameras from a toilet, ATM machines, a bank, store, subway station, a parking garage and a post office.

While the United States and the People’s Republic of China invented ping-pong diplomacy, Jung has invented what I call ping-pong fight choreography. 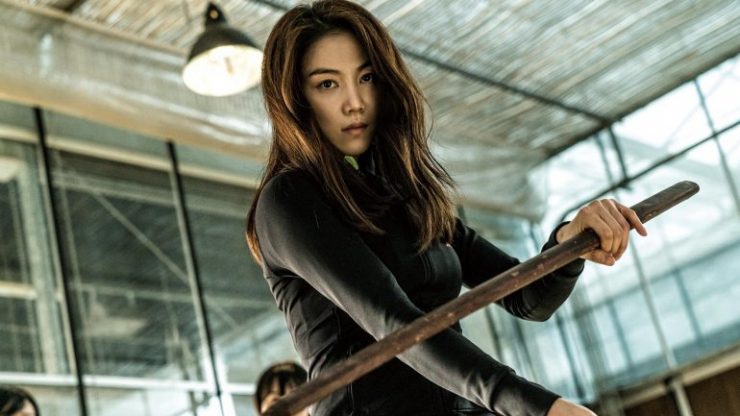 I call Jung’s innovate shooting approach ping-pong ball choreography. Envision the shots you’d get if the camera was a ping-pong ball rebounding between actors and bouncing of off walls, the ground or ceiling as it also smashes through windows, doors, walls or is thrown off a building roof. At the same time you’re watching each actors’ physical and facial reaction as the ball speeds toward them, hits them and rebounds away…and that’s how the fights look in Villainess.

Jung explains that Villainess was inspired by his own short film Standing on the Knife saying, “I wanted to show a woman’s life, one who was fated from birth to become a villainess. Throughout the film (except the finale duel against her dad’s killer), Sooh-hee never fights one-on-one. Wherever she goes, she faces many foes at the same time, thus it was critical to ensure all action scenes were new and never overstayed their welcome.”

Though trained in Korean martial arts since childhood (holds a 3rd degree black belt in hapkido and a 2nd degree in taekwondo), the puppy-eyed svelte and Twiggy-esque Kim still had to spend two months at the Seoul Action School to learn how to use a long sword, dagger, pistol, rifle and the chop ’em up battle ax. 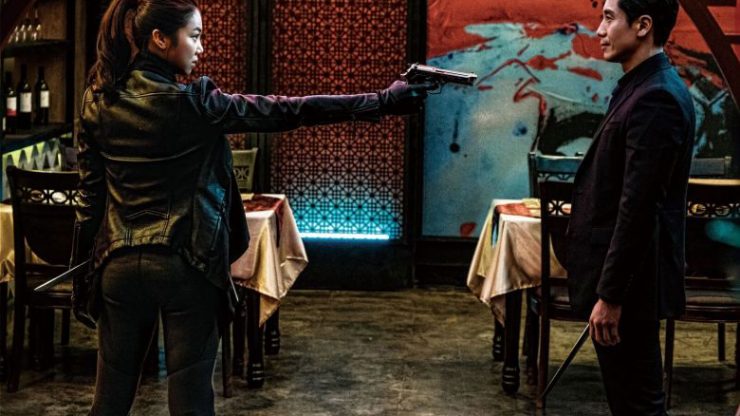 Perhaps influenced by Hardcore Henry (2015), an action movie that’s a 90-minute POV shot from Henry’s perspective, during the opening fight, Villainess opens with several long unedited first person perspective shots of Soo-hee (a stuntman wearing a head mounted camera) with guns and blades walking through corridors and staircases killing a ton of assailants. There’s no sense of motive behind the killing it’s just tempered turbulence.

It’s the beauty of ping-pong choreography, it hides so much so well, and it doesn’t matter, because she quickly enters a large room filled with 20 villains. The action snaps around, we see Sooh-hee, and the ball keeps rolling by using a hand held camera.

Each subsequent fight sequences appear to be more intricate and reveal ingenious hyper dynamic energy as things are just exploding and imploding within the same shot.

Thus the big crime of this film is trying to call Kim the female John Wick or the film is better than AB, because those film don’t give Villainess justice. At the end of the day, the Villainess fights were more creative and inventive than JW and AB, not so much due to the physicality of the actors or the creative fight choreography but from Jung’s innovative camera strategy on how the fights were shot.