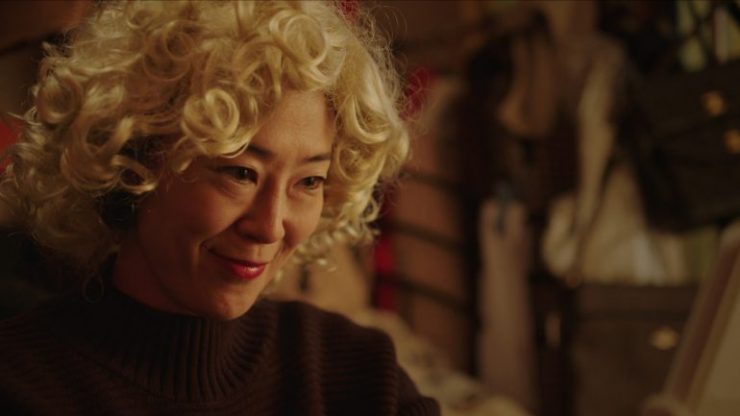 Nestled between the San Diego Model Railroad Museum, a great place to train, and the world famous San Diego Zoo, is the San Diego Natural History Museum’s Kaplan theater, where you can still hear creatures chattering, bellowing and grunting. I’m not referring to the place of Lions and Tigers and Bears, Oh My!, but the good folks attending the 18th SDAFF opening film saying IMAX and large-format screen and loud Dolby Digital sound, Oh Lucy!

As I’m watching Oh Lucy!, I’m having flashbacks to my time teaching English in 1979 Republic of China, now Taiwan, where the last thing a white dude should do is hug a student, especially a female because back then, apart from being improper, such a public or private display of affection could be tantamount to a marriage proposal. Even if you accidentally brush shoulders or touch a knee, that means you’re probably dating. That’s not my monkey, that’s not my circus. Yet the irony of Oh Lucy!, and I can’t speak for Japan today, is that the film seemed to be heading in that direction, with the consequence of what a miscommunication like a simple hug could result in during 1970s Taiwan.

Dare I say that the victim of this not so simple hug is Setsuko (Shinobu Terajima), a bored housewife who’s never been married, where her lonely, silently miserable, chain smoking emotionless peril has been slowly choking her being. She’s gone way beyond a mid-life crisis and searching for a light at the end of the tunnel, because she’s never had a tunnel to look through or any kind of life to begin with.

Set in a part of Tokyo that’s not in any tourist brochure, after witnessing the suicide of young man calling it quits and watching the condescending pseudo-respectful retirement party for an affable retiree who thinks she’s important only to realize she’s a piece of unagi that no sushi chef would touch, she allows herself to be convinced by her airhead niece Mika to pay her a ton of money to take Mika’s place in an English class given at what looks like a seedy, happy ending massage parlor. 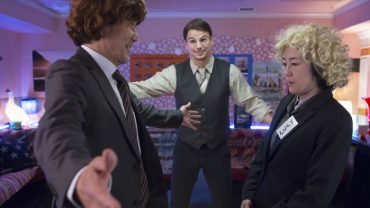 Though not carrying a gun, Lucy is completely disarmed by the heartthrob American teacher John (Josh Hartnett) who breaks down his Japanese students’ cultural facades by dishing out hugs and high-fives, giving them English names and in her case wearing a blonde wig. Ironically, with that first hug we see and she feels an incredible rush of instant change, she’s not a drab housewife so to speak, but a blonde bombshell capable of love, sex and adventure. The obvious comedic possibilities are rife when she sees Mika and John abscond away into the night to Los Angeles and she decides to take her sister, who’s also Mika’s mum, and fly to LA in search of Mika and John.

It now becomes An American Tail V: Minnie Mouse searches for Fievel in San Diego. Yep, it becomes that highfalutin and engaging as Japanese filmmaker Atsuko Hirayanagi takes her sleek and short film of the same name and expands its emotional universe. Yet the question remains, will Minnie find her Fievel and will the story play out like an adorable dormouse meets the fluffy, lovable white furry albino rat or a Secret of Nimh menacing rat? All I know is that if four rats in a row sideswipe a car, that would make them row-dents.